A place for poems, songs, rhymes, and traditions from around the world for both kids and grown-ups to enjoy!
Advertisement
Christmas Eve and Day in France
December 19th, 2021 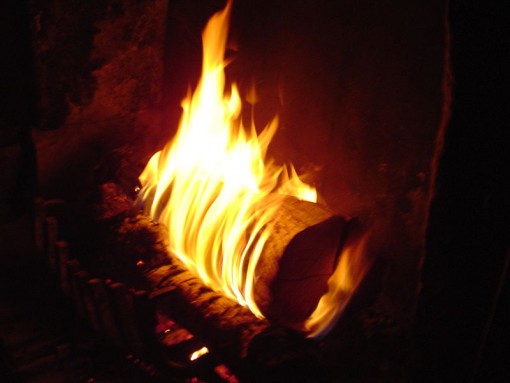 Christmas Eve mass is celebrated in the evening some time between 6Â and 10 p.m. even though it’s called “midnight mass”. Beyond practicing Catholics, it also attracts non-practitioners. From the 7th century on there were 3 different masses, butÂ starting in the 19th century they’re saidÂ in succession during one mass. ThenÂ people go home forÂ Christmas EveÂ to a meal that’s eaten with the family late in the evening.

The French novelist, Alphonse Daudet describedÂ in TheÂ 3Â Low Masses from his collection “Contes du lundi” (Monday Tales), what happens to a parish priest celebrating the 3 MassesÂ on Christmas Eve in the year 1616. He also describes the food that’s prepared for the Christmas Eve meal.

AÂ family meal is eaten after midnight mass,Â which is to say late in the evening,Â whetherÂ youÂ went to mass or not. It’s generally long and plentiful. As a starter,Â people eat oysters and/or smoked salmon and/or foie gras. The main course is usually a turkey, possibly stuffed, and often garnished with chestnuts, but it can be game or any other unusual dish – in some regions, goose is in the spotlight. The traditional dessert is the Yule log, either a rolled cake topped withÂ icing or one made with ice cream. If there are no young children, gifts are exchanged at midnight, but if there are kids, we wait until the next morning to open them,Â afterÂ Father Christmas has left them at the foot of the fir tree.

In Provence, the traditional Christmas Eve meal is called the “big supper” (le gros souper). It’sÂ a “lean” meal because it’s meatless, but it is plentiful. There are 7 dishes eaten, which can be:

First, the table is set with 3 superimposed white tablecloths (one for the big supper, one for the Christmas meal – with meat – and one for the evening meal on the 25th –Â for the leftovers). ThreeÂ candles (representing the past, the present, & the future) are placed on the table, a loaf of bread cut in 3 (all these threes evoke the Trinity)Â and holly (the prickles recalling the crown of thorns and theÂ berries, the blood of Christ).Â People use their fancy dishes and add a cover over one place setting for a passing poor person or a deceased relative. All dishes, including the 13 desserts, should be laid out on the table.

In Provence, after the Christmas Eve meal, traditionally came theÂ custom of bringing out the Yule LogÂ (though lessÂ families do it these days)…

The customÂ of the Yule Log dates back to pagan winter solstice traditions. At that time a very large log, the trunk of a fruit tree if possible, was burnt in the fireplace. It was supposed to be able to burn for at least three days and three nights and was supposed to guarantee a good harvest for the following year. The ceremony was practiced throughout France.

In Provence, according to “The Treaty of Superstitions” by Jean-Baptiste ThiersÂ (1697 ed.),Â people blessed the log and chanted:

Nowadays the oldest and the youngestÂ in the family carry the log inside the house, it is still blessed 3 times with cooked wine and the elder pronounces these words before lighting it:

Kill fire, set fire,
Rejoice!
May God rejoice us!
Christmas comes, all goods come!
May God grant us grace to see the coming year
And if we’re not more numerous, let us not be less!

It is family-friendly and resembles the Christmas Eve meal, that is to say that we choose from the following dishes:

For the Main Course:

Regarding the treats (sweets, chocolates, cookiesâ¦), depending on the region, we put out candied chestnuts, chocolate truffles, “fancy fruit” and Christmas cookies.

This article was posted on Sunday, December 19th, 2021 at 8:14 pm and is filed under Christmas, Christmas Eve Traditions, Countries & Cultures, France, Holidays Around the World, Mama Lisa, Provence, Yule Log. You can follow any responses to this entry through the RSS 2.0 feed. You can skip to the end and leave a response. Pinging is currently not allowed.