A place for poems, songs, rhymes, and traditions from around the world for both kids and grown-ups to enjoy!
Advertisement
The Christmas Season in France
December 17th, 2021 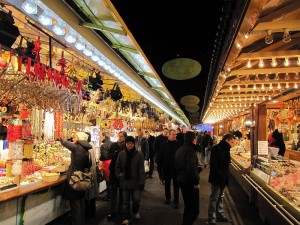 At Christmas Markets you canÂ buy items related to St. Nicholas Day (12/6) and also Christmas. You can find handcrafted articles for children (wooden toys, etc.) and for adults (jewelry, handmade clothes, etc.), decorative objects (wooden, metal, ceramic lamps, etc.), and food to take away (wine, liqueur, products made from truffles, saffron, and honey). Of course, you can also find items to consume on the spot like mulled wine, cookies, gingerbread, and hot chestnuts.

In antiquity, the fir tree was originally part of pagan rituals for the winter solstice. In its current form, the custom dates back to the Middle Ages and also comes to us from Germany. The fir tree symbolizes the renewal of life.

Nowadays, natural Christmas trees are not fir trees but spruces that are cultivated for this purpose. There are also trees made of plastic. The Christmas tree is decorated with balls, garland, fixed or flashing lights, and figurines like angels and stars. Traditionally, the youngest child in the family places the star, representing the star of Bethlehem, on top of the tree. On Christmas Eve, the toys are placed at the foot of the tree.

The decorated tree is also part of the decorations in French towns and villages for the holiday season. 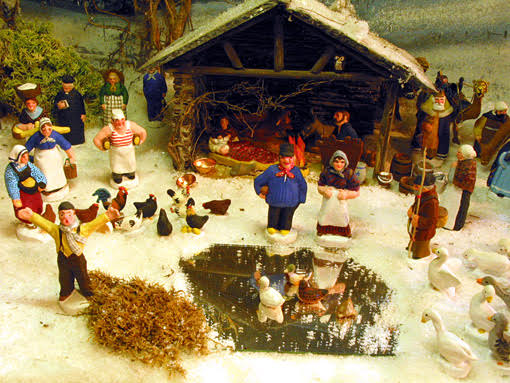 The manger represents the Nativity scene. The oldest existing carved manger dates back to 1288 and was made by Arnolfo di Cambio. It can be seen in the Museum of the Basilica of Saint Mary Major in Rome.Â Nativity scenes in their present form date back to the 16th century, especially in Italy.

After Nativity scenes with real people came those made of wax and wooden figurines… but the Revolution closed churches in France and people therefore made mangers in the privacy of their own homes.Â  Nowadays, we find mangers in all churches in France in December. Mangers always have the Holy Family represented, they’re usually accompanied by the donkey and the ox, the Three Kings, the Star, some angels, and shepherds with their sheep.

In Provence, the characters in mangers are called santons, from the ProvenÃ§al word “santoun”Â meaning “little saint”. TheÂ figurines are made of red clay, cooked in a kiln and then painted by hand. They includeÂ characters from traditional Provencal life: the “ravi” (village idiot), the angel “BoufarÃ¨u” who blows his trumpet to announce the news to the shepherds, the drummer boy, the mayor, the washerwoman, the knife sharpener, the miller and many others.

3rd Photo: Personal photo by Jean-Pol GrandmontÂ of a WalloonÂ manger and “santons” made by Robert Noirhomme, Wikipedia, CC by 3.0.

This article was posted on Friday, December 17th, 2021 at 8:09 pm and is filed under Advent, Christmas, Countries & Cultures, France, Holidays Around the World, Mama Lisa, Manger. You can follow any responses to this entry through the RSS 2.0 feed. You can skip to the end and leave a response. Pinging is currently not allowed.