The little chicks say pio pio pio
When they are hungry
And when they are cold.
The mother hen looks for corn and wheat.
She gives them food and grants them shelter.
Under mama's wings, huddling up,
Sleep the little chicks
Until the next day!!!!!!

The little chicks say pio pio pio
When they are hungry
And when they are cold.
The mother hen looks for corn and wheat.
She gives them food and grants them shelter.
Under mama's wings, huddling up,
Sleep the little chicks
Until the next day!!!!!!

Andre wrote: "I am sorry to spoil your fun, but the song titled "los pollitos dicen ......" is not from Costa Rica. When my three daughters were in Brownies, I happened to read their books. In one of them, I learned that the song "los pollitos dicen....." is from Ecuador. Here in the United States, there is a huge misconception that everything in Spanish originates in Mexico and now I find Costa Rica. In North America, there is one Spanish speaking country, six in Central America, two in the Caribbean and nine in South America. Each one of them speak the Spanish language with its own flavor and 'made up words' that does not mean anything in other Spanish speaking countries. Mexico happens to have the bulk of it. They use many Aztec words in their daily language. In South America they borrow from Quechua, Aymara and Guarani... "

I appreciate Andre mentioning that this song might be originally from Ecuador. But I'd like to mention that we post songs on different countries even if they don't originate from there – but are simply sung there by many people.

Furthermore, there are other countries that claim this song. On the internet alone, one site says it's from Spain and another says it was once attributed to a Chilean author.

Our guess is that we'll never know for sure where it's from originally. It's interesting to know that it's sung across the Spanish-speaking world.

Heleen de Vaan was kind enough to send me the following hand gestures that go with this song...

Many thanks to Heleen for providing us with all of this information! 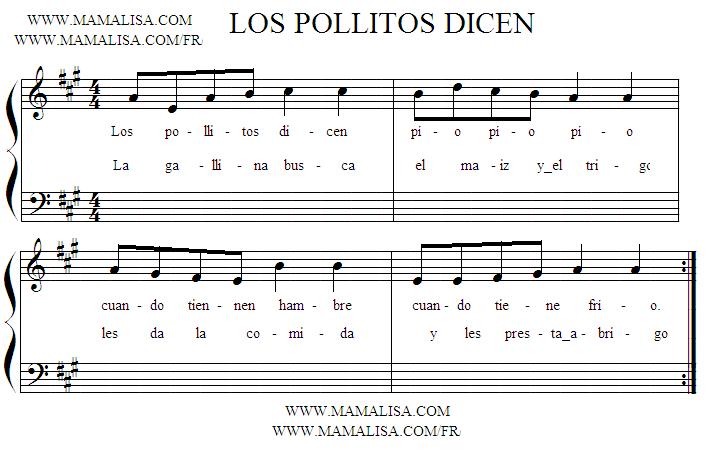 Many thanks to Pilar Griffin for contributing and translating "Los Pollitos Dicen" and to Andre Juillet for pointing it out as a song from Ecuador.