A place for poems, songs, rhymes, and traditions from around the world for both kids and grown-ups to enjoy!
Advertisement
Quince – Sweet Fifteen
November 11th, 2011 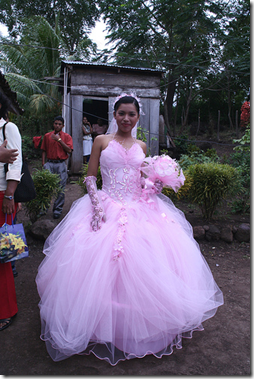 The fifteenth birthday is very important for girls in many Latin American countries and in some Hispanic communities in the US.  It’s called Quince or QuinceaÃ±era (15 years).  It marks a girl becoming an adult.  It’s a bit like the Jewish Bar Mitzvah, a Sweet 16 Party and a Debutante Ball all mixed into one.  It’s a right of passage.

The custom for the party varies from country to country.  The birthday girl wears a fancy dress that’s traditionally a pastel color or pink.  Many wear a tiara.  There’s normally a religious ceremony at church involving the parents and godparents.

The party is typically a big dance like a ball, sometimes including a waltz.  The ball may highlight a dance with the father or boyfriend.

One tradition in some countries is The Ceremony of the 15 Candles. The girl gives candles to 15 people who were important to her in her childhood.

There’s also the Tradition of the Last Doll.  The girl gives away her last doll or trades it in for a bouquet.  It’s a symbol of giving up the toys of childhood and becoming an adult.

Another tradition, which reminds me of Cinderella, is where the girl goes to the party in flat heeled shoes and trades them in for high heels, which the father may put on her as part of the ceremony.

Feel free to share your QuinceaÃ±eras traditions in the comments below.

This article was posted on Friday, November 11th, 2011 at 10:05 pm and is filed under Argentina, Birthdays, Colombia, Costa Rica, Countries & Cultures, Cuba, Customs and Traditions, Dominican Republic, Ecuador, Guatemala, Hispanic, Holidays Around the World, Mexico, Puerto Rico, Quince, Quinceaneras, Uruguay, USA, Venezuela. You can follow any responses to this entry through the RSS 2.0 feed. You can skip to the end and leave a response. Pinging is currently not allowed.

One Response to “Quince – Sweet Fifteen”