'Princess Serenity' from China sent this translation and commentary about the song:

Seek, seek, seek a pal,
I have found a best pal,
Give a salute, shake your hand,
You are my best pal,
Goodbye!

This children's song was popular in 1960s and 1970s. At that time, most Chinese songs, even children's songs, contained a lot of content about "politics". However, the song Zhao Peng You is just about two children who meet each other the first time, and show the love of friendship.

According to Guangming Daily 《光明日报》 the author of this song is still unknown.

In my opinion, the word "friend" is too formal. Since it is just a nursery rhyme, perhaps the informal word "pal" is more suitable. But we can say "a good friend", we seldom say "a good pal". According to Cambridge Advanced Learner's Dictionary, "a best pal" is a correct collocation.

Here the Chinese word "个" is a classifier (or "measure word", 量词), so
敬个礼 has the same meaning as 敬礼 (salute). In the Commonwealth of Nations [the British Commonwealth], only officers are saluted, and the salute is to the commission they carry from their respective commanders-in-chief representing the Monarch, not the officer themselves. However, in China, more or less, the salute is just a kind of polite behavior between two people, by raising the right hand to the side of the headgear. It is not as formal as that in Western countries. Even children can salute each other. Or maybe this gesture is to imitate the PLA [People's Liberation Army – the combined military of China] and to show children's respect to the PLA. (Though bowing is also a kind of salute, it seems too formal and children seldom use it.) And the Young Pioneers of China (中国少年先锋队) have a special way of saluting (bending the right arm and raising the right hand directly above the head, the palm flat and facing downwards, and the fingers together. It symbolizes that the interests of the People supersede all).

"In kindergarten, there's a 'classical' game based on this song. The classes play it together. Firstly, the nursery teachers play the music (by record player, CD player, MP3 player and so on) and let all the children sing this song together. At the same time the children run around in the classroom or playground. (Of course, there are so many children in a kindergarten and the playground is too small. Even though a child runs aimlessly, he can meet a classmate by chance.) When a child sings the first two sentences, he runs and tries to find a classmate. Then the two stand face to face, salute (raising the right hand or bowing) each other and shake hands. At last, he says 'goodbye' and they leave each other in order to find another child, and repeat the actions. So the game continues. It can also be performed as a dance in a performance." -Princess Serenity from China

Here's another translation by Yi Lin, Ray Lee and Francisco...

Looking for friends
I found a friend
Hi, shake my hand,
You are my good friend.
Goodbye!

Thanks to Francisco Javier Fontalva Chica for contributing this song, for helping to translate it (separately) and for singing it for us in the 2nd mp3. 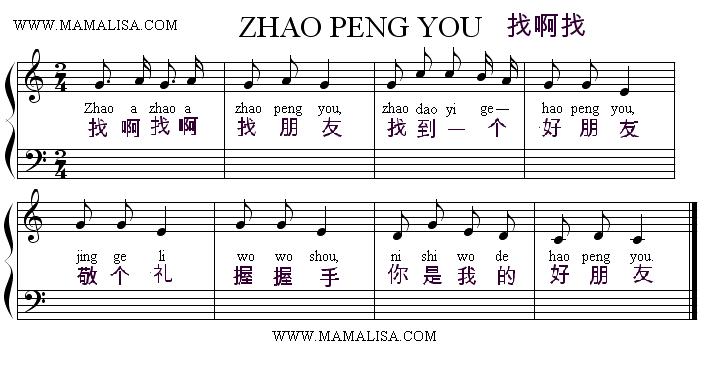 Many thanks to Princess Serenity (that's her pen name!) for contributing and translating this song and providing the game instructions and such interesting commentary. Thanks to Yi Lin and Ray Lee for helping with one of the translations. Final translation by Lisa.

Thanks to Monique Palomares for the midi, score and illustration.