A place for poems, songs, rhymes, and traditions from around the world for both kids and grown-ups to enjoy!
Advertisement
The Mid-Autumn Festival in Hong Kong
May 17th, 2022 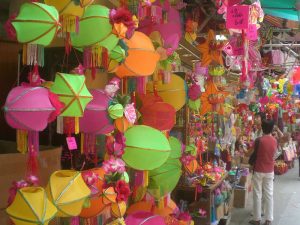 The Mid-Autumn Festival has been celebrated in China for over 3,000 years. It’s held in autumn when the moon is thought to be at its fullest and brightest, specifically on the 15th day of the 8th month on the lunar calendar. It was traditionally a harvest festival.

Recently I asked Ray Lee, who grew up in Hong Kong in the 70’s, if he remembers how people celebrated the holiday there. He replied, “People ate mooncakes. Kids played with lanterns. That’s it. Businesses and schools stopped giving their workers and students a day off when I was in 4th or 5th grade. But I looked it up and found out that people have the day off again.

One thing that people do on Mid-Autumn Festival is è³æ, i.e. they look at the moon and admire the moon. 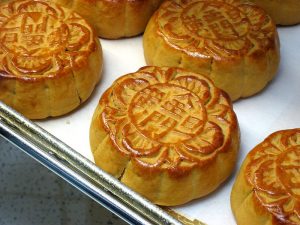 People also eat mooncakes.Â Inside the mooncake is lotus seed paste. It’s sweet. Some mooncakes also have an egg yolk in it.

Now, there’s a story, which I am not sure is true about the Mid-Autumn Festival…Â The story says that secret messages were passed inside mooncakes to coordinate the revolution that overthrew the Yuan Dynasty (where China was ruled by the Mongols), and started the Ming Dynasty.Â It seems it’s not true. It’s just a story. (Learn moreÂ here.)

We used to go to a park and would walk around with our lanterns at night. They were made of paper and wood or bamboo sticks. We would light a candle and put it inside the lantern. It was cool because you would see other kids in the park. So you got to see many, many other lanterns of different sizes, colors and shapes.”

Many thanks to Ray Lee for sharing this tradition with us!

This article was posted on Tuesday, May 17th, 2022 at 4:13 pm and is filed under China, Countries & Cultures, Holidays Around the World, Hong Kong, Mama Lisa, Mid-Autumn Festival. You can follow any responses to this entry through the RSS 2.0 feed. You can leave a response, or trackback from your own site.