A place for poems, songs, rhymes, and traditions from around the world for both kids and grown-ups to enjoy!
Advertisement
Keeping Crickets as Pets in Japan and China
November 9th, 2016 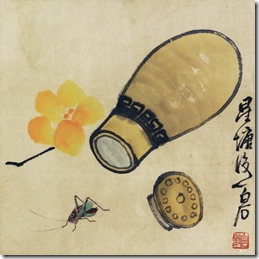 We recently posted a Japanese song called The Sound of Insects – è«ã®ãã (Mushi no Koe). In the process of researching the song, I found out that Japanese and Chinese people sometimes keep crickets as pets. The practice was more common in Japan in the past, but it seems some people still do it. The type of crickets they keep are called Bell Crickets. They remind people of Autumn.

I asked Debbie Davidson, who has lived in Japan for most of her life, about whether or not people still keep crickets there. She wrote:

"You probably mean bell crickets (although people here keep other kinds of beetles too). Seeing as they sell bell crickets in pet shops, I’d say that yes, the tradition continues. But the lives of bell crickets are short, so it’s not like having a dog or cat. I used to subscribe to a science magazine for kids when I was homeschooling my son. It came each month with the materials to do some kind of experiment. Early one summer it came with a pack of bell cricket eggs and instructions for hatching them. That was a lot of fun. I wrote about it here."

According to Wikipedia, the practice originated in China:

"Keeping crickets as pets emerged in China in early antiquity. Initially, crickets were kept for their ‘songs’ (stridulation). In the early 12th century the Chinese people began holding cricket fights… The Japanese pet cricket culture, which emerged at least a thousand years ago, has practically vanished during the 20th century."

Ayako Egawa, from Japan, seemed to confirm this:

Sadao Mazuka wrote, "When I was a child, I surely kept a bell-cricket in my cage. It gave us pleasant sound like rin-in rini-rin riin-rin. And I fed it cucumber or eggplant, I’m sure. It’s a nostalgic memory from my childhood."

I asked my cousin Jim about whether they still keep crickets as pets in China. He lived there for about 8 years. Here’s what he wrote:

"In China they race crickets, consider the sound soothing and keep them in little basket balls. It’s more something you do as kids, but my boss still had a bunch. Old men move on to small finch-like birds. They take their birds to the park in cages at sunrise and hang them from the trees, smoke cigarettes, and gab."

Keeping crickets is very seasonal. They’re caught between August and September and they only last for a couple of months.

It’s interesting to learn about this because here in the US, the sound of crickets are considered a nuisance. People actually put out traps to get rid of them.

Many thanks to Jim Yannucci, Ayako Egawa, Debbie Davidson and Sadao Mazuka for telling us about the modern practice of keeping crickets as pets in Japan and China.

This article was posted on Wednesday, November 9th, 2016 at 8:10 pm and is filed under China, Countries & Cultures, Crickets, Japan, Parenting, Pets. You can follow any responses to this entry through the RSS 2.0 feed. You can skip to the end and leave a response. Pinging is currently not allowed.

3 Responses to “Keeping Crickets as Pets in Japan and China”