A place for poems, songs, rhymes, and traditions from around the world for both kids and grown-ups to enjoy!
Advertisement
Chinese Mother Goose
November 16th, 2016 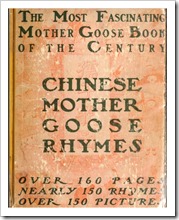 There’s a Chinese Mother Goose Book from 1900 that features Chinese nursery rhymes with English translations. We have some of the rhymes on our Chinese Song and Rhyme Pages.  A while back, Pete Paradiso wrote about some of the rhymes on Ben Seeberger’s blog Easternity.com. I asked Pete how well-known they are today and whether or not the language seems quaint like English Mother Goose can be. Here’s what he wrote:

I don’t know whether many Chinese people still recite these Mother Goose rhymes, but it’s useful to reflect that in China, 100 million [people] is a relatively small number … Some of the Mother Goose rhymes have survived in modernized versions — see the images I’ve attached [below], which you can compare in terms of the updated English text and pictorial symbolism:  the first is from Headland’s book, and the second I found somewhere on the Internet, but have since lost the source …

[These are the images that Pete refers to…] 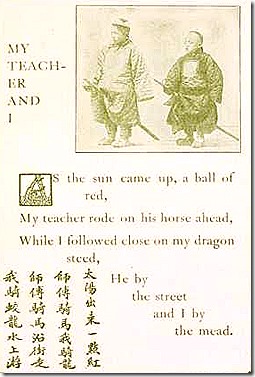 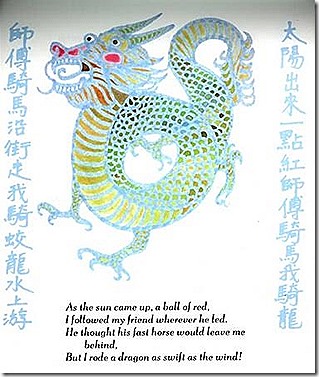 When you ask whether the (Chinese) language in Headland’s text is "archaic," do you mean "quaint," as in:

Not too many children today run around saying "art thou?," but I suppose it would be a travesty to rewrite Mother Goose into "modern" English … I think most Chinese people would understand the Mother Goose rhymes in Chinese as Headland published them …The only thing to bear in mind is that on the mainland the Chinese written characters were "simplified" some 50 years ago, and quite a few no longer look like those printed in Headland’s text (but of course they still can be read and understood, apart from the words or phrases that no longer are current) — And to the Chinese living in Taiwan, where the characters were not simplified, Headland’s Chinese text would appear unchanged, but still might seem a little "quaint" or old-fashioned — but that’s the charm of Mother Goose, isn’t it? …

Since that correspondence I’ve actually found some of the rhymes from the book on YouTube. So at least some of them are still known and recited. We’ll be slowly adding more of the Chinese Mother Goose nursery rhymes to our Chinese Song and Rhyme Pages, especially ones that have YouTube videos.

Many thanks to Pete Paradiso for sharing his thoughts with us about Chinese Mother Goose. You can check out Pete’s Chinese Ink Paintings here.

Note: The image at the top of the page and the image above left are both from Headland’s book. The image image above right comes from the more modern book, Chinese Mother Goose by Ed Young.

This article was posted on Wednesday, November 16th, 2016 at 9:57 pm and is filed under China, Chinese, Countries & Cultures, Hong Kong, Languages, Mother Goose, Nursery Rhymes, Taiwan. You can follow any responses to this entry through the RSS 2.0 feed. You can skip to the end and leave a response. Pinging is currently not allowed.