A place for poems, songs, rhymes, and traditions from around the world for both kids and grown-ups to enjoy!
Advertisement
Weddings & Marriage in France
November 13th, 2019 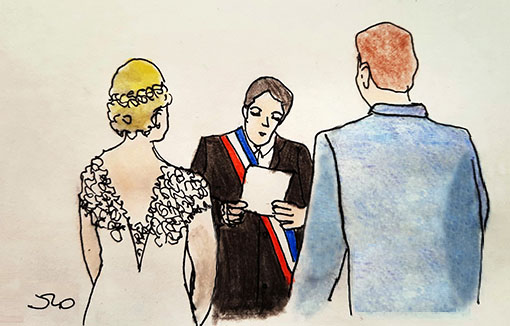 Since the separation of church and state in France in 1904, only the Civil Marriage is recognized by the State. It has to be celebrated at City or Town Hall before any religious ceremonies take place. Nowadays, it’s usually celebrated at the Town Hall where the couple lives or where their close family lives (in general, the parents).

Traditionally, it was (and often still is) celebrated in the community where the fiancÃ©e was brought up. Before the marriage, the future husband and wife must give a certain number of official documents to city hall: identity cards, birth certificates with parentage, proof of residence, and information on the witnesses.

Once the documents are submitted, an announcement must be posted at the Town Hall where the ceremony will take place and at the Town Hall in the town where at least one of the future spouses live. This must happen at least 10 days before the wedding. The notice must include their first and last names, their professions, addresses and the date and place where the marriage will take place.

On The Big Day

The future spouses go to Town Hall with their obligatory witnesses and with their guests. In a room that’s open to the public, the mayor or deputy mayor reads to them the civil code concerning marriage. Then he asks them for their consent. When the two respond “Yes”, he declares them united in marriage. The newlyweds, the witnesses and the mayor all sign the civil register.

If there is a religious ceremony, the couple celebrates it after the civil one. The couple must furnish the marriage certificate from the Town Hall to the religious establishment. Traditionally, everyone goes from the Town Hall to the church if they’re Catholic. They go on foot in small villages or by car. The wife goes on the arm of her father, her mother follows with the husband’s father and the husband goes last on the arm of his mother. The ceremony can be a simple benediction of the rings or it can be part of a mass. In both cases, the two exchange their consent and the parish registers are signed. The newlyweds leave the church together first.

The official marriage having been celebrated, the wedding celebration begins. It varies depending on the people, the social milieu and the place.

Since the 19th century, in a classical fashion, the bride wears a white dress, a veil or a flower crown in her hair, and sometimes she wears gloves. She carries a bouquet of white flowers. In the past, the bride would simply wear her nicest dress. The groom wears a suit. Of course, nowadays there are weddings that are more original like those where everyone wears jeans.

A photographer takes photos of the newlyweds, alone and with their families and friends: with the close family, then the family that’s now bigger from the wedding.

The Aperitif and The Meal

Often the meal is just for the parents and friends. In that case, an aperitif or drink of friendship is offered to the people who are less close (coworkers, less close friends of the family, etc.).

Between courses, often people dance or activities are proposed to amuse the guests and help them get to know each other better (i.e. the families and friends of the new husband and wife).Â Before stereos and DJ’s, the guests would sing to maintain the joy and good humor.

In the past also, couples generally didn’t live together before the marriage. They would sneak away around midnight or so to a secret location to celebrate their wedding night. When the young men would notice, they’d leave too to try to find them. In the early morning, people would find theÂ newlyweds and give them a restorative soup.

The next day it’s possible that the close friends and family members will be invited to a brunch to finish the celebrations more serenely.

There’s a song called Lo torrin in the Gascon dialect that’s about the soup that’s brought to newlyweds and a recipe for Torrin Soup.

You can read this Article in French.

This article was posted on Wednesday, November 13th, 2019 at 1:42 am and is filed under Countries & Cultures, Customs and Traditions, France, Mama Lisa, Wedding Attire around the World, Wedding Traditions, Weddings. You can follow any responses to this entry through the RSS 2.0 feed. You can skip to the end and leave a response. Pinging is currently not allowed.