A place for poems, songs, rhymes, and traditions from around the world for both kids and grown-ups to enjoy!
Advertisement
New! Mama Lisa’s World Animal Poetry Book
November 17th, 2019 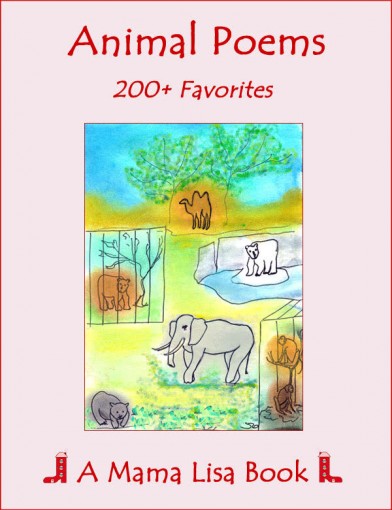 In this collection, you’ll find poems about those animals as well as clams, microbes, and even a pirate’s parrot!

This is our biggest book yet, featuring over 200 animal rhymes, poems, fables, tongue twisters, and even some songs.

There’s a poem about how to draw a pig, a section about pets, and many favorites like “Teasing Mr. Alligator” and “Five Green and Speckled Frogs”.

Some are short to enjoy with young kids. Some are longer and tell a whole story.

It’s easy to find poems about an animal you’re interested in! The book is organized into section on animals of the land, air, and sea, along with reptiles, and pets.

All of the songs, rhymes, and poems in this book include links to web pages where you can listen to recordings!

201 poems and songs
Full text of each
Links to web pages with recordings and videos, many by ordinary people who have contributed them
Illustrations
You’ll find 201 songs and poems about animals, including:

The Bear Went Over the Mountain
How The Camel Got His Hump
The Purple cow
The Blind Men and The Elephant
The Unfortunate Giraffe
The Ambitious Kangaroo
Five Little Monkeys
The Envious Lobster
The Owl and the Pussy-Cat
The Dog and The Shadow
The Old Hen She Cackled
And many more!

This article was posted on Sunday, November 17th, 2019 at 7:51 pm and is filed under Australia, Countries & Cultures, England, English, Ireland, Languages, Mama Lisa, Poems, Poems about Animals, Poetry, USA. You can follow any responses to this entry through the RSS 2.0 feed. You can skip to the end and leave a response. Pinging is currently not allowed.