A place for poems, songs, rhymes, and traditions from around the world for both kids and grown-ups to enjoy!
Advertisement
Torrin Soup for Newlyweds, From the Occitan Region of Southern France
January 13th, 2009

Guest blogger, Monique Palomares works with me on Mama Lisaâs World en franÃ§ais. Monique grew up speaking the Occitan language in southern France. Occitan was the language spoken by the troubadours – largely in southern France – but also in parts of Spain and Italy.

Last week, Monique wrote about an Occitan Wedding Custom and Song from France. The custom revolves around a soup called Torrin, that’s given to the newlyweds. Here’s the recipe from Moniqueâ¦ 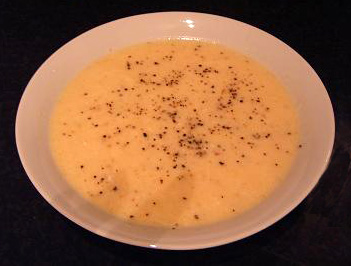 A large spoonful of goose or duck fat (or oil)
5 or 6 garlic cloves
A spoonful of flour
2 eggs
Salt & Pepper
Vinegar
(I usually use wine or balsamic vinegar but it’s just a dash of it so I suppose you can use any.)

2. Put the fat in a large frying pan and slowly fry the garlic, but don’t allow it to brown. Add the flour, stirring it quickly.

3. Pour in the boiling water. Add salt and pepper. Allow to boil for 15 min.

4. Separate the egg yolks and whites. Beat the yolks with a dribble of vinegar.

5. After 15 minutes, pour the egg whites into the garlic/flour mixture and stir quickly. Lower the flame. Add the yolks, stir and DO NOT allow to boil (or the yolks will coagulate and you’ll have yellow threads instead of a beautiful yellow broth).

Torrin Soup can be served with croutons or thin slices of bread.

In some areas they cook it with equal amounts of onions and garlic, then they sprinkle grated Swiss cheese on top and broil it in the oven.

My mother used to cook it. She’d use oil, not goose fat. She used peanut or sunflower oil, but you can use olive oil or any frying oil. The “genuine” recipe is with goose or duck fat. My mother also added vermicelli in step three, after the water started to boil again. Then came the egg whites and the yolks. But we didn’t serve it with bread, the vermicelli would be enough carbohydrates! We called it “Soupe Ã  l’Åuf” – “Soup with egg”.

“Torrin” is a word from the South-West.

This article was posted on Tuesday, January 13th, 2009 at 1:27 pm and is filed under Countries & Cultures, Customs and Traditions, France, Main Course, Mama Lisa, Occitan, Occitan, Recipes of the World, Torrin Soup, Weddings. You can follow any responses to this entry through the RSS 2.0 feed. You can skip to the end and leave a response. Pinging is currently not allowed.

One Response to “Torrin Soup for Newlyweds, From the Occitan Region of Southern France”