A place for poems, songs, rhymes, and traditions from around the world for both kids and grown-ups to enjoy!
Advertisement
Knock-Knock Jokes around the World
June 3rd, 2015 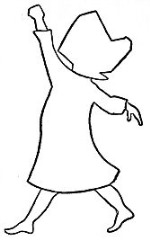 can be found all over the world.  They have a simple formula.  In English, they start with, "Knock, knock!" As if someone’s knocking on the door.  The answer is almost always, "Who’s there?" Then the joke proceeds with a play on words.  Here’s a good example:

Knock, knock.
Whoâs there?
Orange.
Orange who?
Orange you going to let me in?

One of the earliest known Knock-knock jokes comes from Shakespeare’s play Macbeth.  Unfortunately, it’s one where the meaning is lost on most of us folks in the modern world! I’ll include the joke at the end of this post in case you’re interested.

The French version of the knock-knock joke starts with "toc toc". Here’s a well-known one that’s told in France around the new year…

Lapinou refers to a rabbit and is also an affectionate name for someone.  In the case of the joke, it’s a play on words with the English, "Happy New Year" (with "le" in front of it).  Can you hear it? L’api nou year! (i.e. L’Happy New Year.)

In Spanish, they also say "toc toc" for knock-knock in this type of joke. Here’s a Spanish knock-knock joke…

In this case the last line sounds like "los ladrones",  meaning "the thieves". (FYI In some Spanish accents you don’t hear the "s" at the end of the word "los".)

Knock, knock!
Who’s there?
Jodelahie
Jodelahiehoe?
I didn’t know you could yodel!

Knock-knock jokes can also be found in Germany, Korea, Japan and South Africa.  Please share a knock-knock joke in your language in the comments below.

Finally, here’s Shakespeare’s knock-knock joke from Macbeth (you can find an explanation following the joke)…

Faith, here’s an English tailor come hither, for stealing out of a French hose.

Come in, tailor; here you may roast your goose.

Explanation: "The joke consists in this, that, a French hose being very short and strait, a tailor must be master of his trade who could steal anything from thence." And, "Others say, perhaps more truly, that the allusion is to a French fashion, which made the hose very large and wide, and so with more cloth to be stolen." And, "A tailor’s goose is the heavy ‘flat-iron’ with which he smoothes and presses his work; so called because the handle bore some resemblance to the neck of a goose." -From The Complete Works of Shakespeare (1881) with explanatory footnotes by Henry Norman Hudson.

This article was posted on Wednesday, June 3rd, 2015 at 6:07 pm and is filed under Authors, Books & Stories, Countries & Cultures, Dutch, England, English, French, Jokes, Knock-Knock Jokes, Languages, Macbeth, Netherlands, Shakespeare, Spain, Spanish, USA. You can follow any responses to this entry through the RSS 2.0 feed. You can skip to the end and leave a response. Pinging is currently not allowed.