A place for poems, songs, rhymes, and traditions from around the world for both kids and grown-ups to enjoy!
Advertisement
Create Your Own Memory Game for your Kids or Students
December 9th, 2006

Last week my daughter and I had to create a memory game for her homework using blank index cards.

Memory games usually have cards that have images on them. There will be two cards with the same image â so that each image comes in pairs. All of the cards are placed face down, mixed up and put into a grid pattern. You then take turns going. On each player’s turn, you turn over two cards so they’re facing up. If those two cards are a match you take them off the board, and put them in a pile in front of you. If you get a match you go again. If you don’t get a match, it’s the other players turn. You keep taking turns until all the matches are gone. Whoever has the most matches at the end wins. 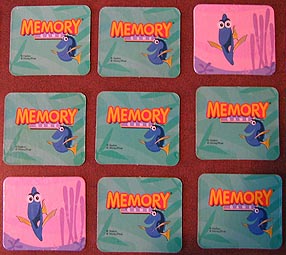 The game can be played with words as well as pictures. My daughter’s homework assignment was to use blank index cards to make a sight word memory game. The object, of course, was to help her learn some sight words, by playing the game. The words were: a, go, I, love, no, the & you. I had to write each word on two different index cards, so they made matches. 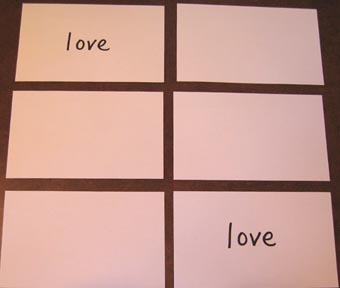 After I prepared it, we played the game. We kept it home and played throughout the week. At the end of the week we sent it into school â so the kids could play there. My daughter can now read all of those words!

My only problem is that my daughter has an excellent visual memory. So when I play memory games with her that have a lot of cards, the competition’s tough, and I often lose! Maybe these memory games are good for adults also â to help us exercise our failing memories!

This article was posted on Saturday, December 9th, 2006 at 5:10 pm and is filed under ABC's, Games Around the World, Learning, Mama Lisa, Memory Games, Parenting, Reading, Reading, Teaching, Writing. You can follow any responses to this entry through the RSS 2.0 feed. You can skip to the end and leave a response. Pinging is currently not allowed.