A place for poems, songs, rhymes, and traditions from around the world for both kids and grown-ups to enjoy!
Advertisement
About the Arapaho Song “Ani Kuni”
April 5th, 2017 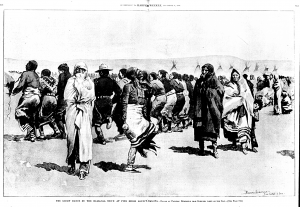 The song “Ani Couni” is known in many countries around the world. Many believe it’s an Iroquois song. But it’s actually an Arapaho ghost dance song, called Ani’qu ne’chawu’nani’.

The Arapaho tribe was loosely aligned with the Lakota and Dakota tribes. In 1890, the US government broke a treaty with the Lakota and took away land in South Dakota and gave it to colonists. The government was supposed to supplement food for them, but eventually cut down their rations. After that, they were at risk of starvation.

The song reflects that situation. The translation is…

Father have pity on me
I’m crying for thirst
All gone and nothing to eat.

The Ghost Dance religion started in 1890 with the belief that the Ghost Dance would unite the living with the spirits of the dead. Those spirits would fight on behalf of the living against the colonists and eventually help the Native Americans live in peace and prosperity.

This article was posted on Wednesday, April 5th, 2017 at 4:00 pm and is filed under Arapaho, Canada, Countries & Cultures, Ghost Dance, Iroquois, Mama Lisa, Native American Indian, Traditional Dances, USA. You can follow any responses to this entry through the RSS 2.0 feed. You can skip to the end and leave a response. Pinging is currently not allowed.