A place for poems, songs, rhymes, and traditions from around the world for both kids and grown-ups to enjoy!
Advertisement
A Bell, A Bird and Me – A Japanese Poem
April 3rd, 2017 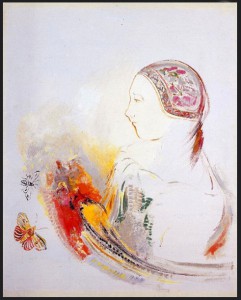 A Japanese poet named Setsuo Yazaki discovered Kaneko’s poem “Big Catch” in 1966. He became enamored with her work and eventually tracked down her brother who still had her diaries with her poems. Through Yazaki’s efforts Kaneko was rediscovered in Japan.

Below you can find the Japanese text of her poem ç§ã¨å°é³¥ã¨é´ã¨ (A Bell, a Bird and Me), with an English translation, the pronunciation and a YouTube animation…

A Bell, A Bird and Me
(English Translation)

Even if I spread out both hands,
I cannot fly at all in the sky,
But the bird that can fly
Cannot run fast on the ground like me.

Even if I shake my body,
It doesn’t make beautiful sounds,
But the ringing bell
Doesn’t know as many songs as me.

A bell, a bird and me,
Everyone is different, everyone is good.

This article was posted on Monday, April 3rd, 2017 at 6:06 pm and is filed under Countries & Cultures, Japan, Japanese, Japanese Poems, Languages, Mama Lisa, Poetry. You can follow any responses to this entry through the RSS 2.0 feed. You can skip to the end and leave a response. Pinging is currently not allowed.