"Schnick-Schnack-Schnuck" is the German version of "Rock, Paper, Scissors". It's used to decide something between two people, such as who goes first in a game, etc. 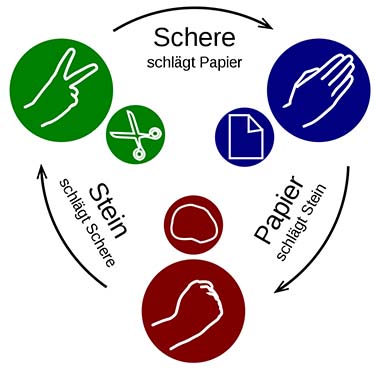 Two players each hide one hand behind their back. Then they say the line together at the same time, "Schnick, Schnack, Schnuck!". On "schnuck" they put their hands out at exactly the same time in one of the three signs, "Stein" (rock), "Papier" (paper) or "Schere" (scissors).

Here's how you determine who won the round depending upon which symbol each kid put out:

If both kids chose the same symbol, they have to replay the round.