This song seems to be connected to the Lussi Night. You can read more about it below from Wikipedia...

"Lussinatta, the Lussi Night, was marked in Sweden 13 December. Then Lussi, a female being with evil traits, like a female demon or witch, was said to ride through the air with her followers, called Lussiferda. This itself might be an echo of the myth of the Wild Hunt, called Oskoreia in Scandinavia, found across Northern, Western and Central Europe.

Between Lussi Night and The cow, trolls and evil spirits, in some accounts also the spirits of the dead, were thought to be active outside. It was believed to be particularly dangerous to be out during Lussi Night. According to tradition, children who had done mischief had to take special care, since Lussi could come down through the chimney and take them away, and certain tasks of work in the preparation for Yule had to be finished, or else the Lussi would come to punish the household. The tradition of Lussevaka – to stay awake through the Lussinatt to guard oneself and the household against evil, has found a modern form through throwing parties until daybreak. Another company of spirits was said to come riding through the night around Yule itself, journeying through the air, over land and water.

There is little evidence that the legend itself derives from the folklore of northern Europe, but the similarities in the names ('Lussi' and 'Lucia'), and the date of her festival, 13 December, suggest that two separate traditions may have been brought together in the modern-day celebrations in Scandinavia. Saint Lucy is often depicted in art with a palm as the symbol of martyrdom." 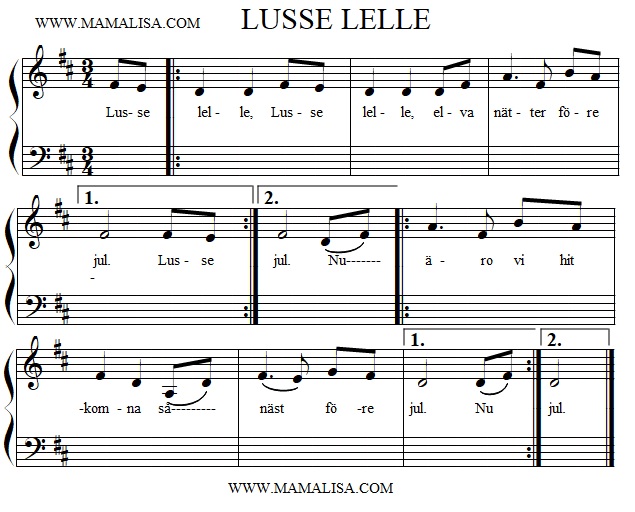 Many thanks to Isak Wenerklang for contributing this song and for his translation into French!