A place for poems, songs, rhymes, and traditions from around the world for both kids and grown-ups to enjoy!
Advertisement
The Bunny Hop & Letkis Craze Around the World
April 3rd, 2015 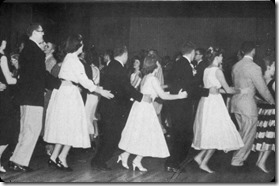 Do you remember doing the Bunny Hop? I learnt it as a kid in the early ’70’s in dance class.

The Bunny Hop and the Finnish Folk Dance called “Letkajenkka” (aka Letkis) are nearly identical.Â  Both became a dance craze around the world.

The Bunny Hop became popular in the early 1950’s.Â  The Ray Anthony Orchestra recording of the song became a hit in 1952. People all over the US started doing the Bunny Hop.

Here’s how to do the Bunny Hop:

Everyone form a (conga) line while holding the hips of the person in front of you.Â  Tap the floor two times with your right foot, thenÂ  tap two times with your left foot.Â  Then hop forwards, hop backwards, and hop, hop, hop (3 times forward). Continue these steps throughout the song.

Here’s a video of people doing the bunny hop…

You can sing this (does anyone remember these lyrics?):

Put your right foot forward, Put your left foot out and do the Bunny hop, Hop, hop, hop

We did the bunny hop in dance class to lyrics like that.

The Letkajenkka (aka Letkis) became popular in Europe, Japan and Latin America in the early 1960’s, a decade after the bunny hop.Â  The idea behind the Letkis is to perform a variation of the traditional Finnish folk dance called the Jenkka, but to modern music.

Here’s how to dance the Letkis:

These lyrics are often in a Letkis song in whichever language the song is in:

You can hear the Finnish Letkis song here.

This dance became popular all over the world in the 1960’s, including in Sweden, Russia (USSR), France, Germany, Italy and Japan.Â  According to Sadao Mazuka, “Around 1965 to 1980 it came wildly popularÂ  here in Japan with the Letkis song by Kyu Sakamoto.”

You can see people doing the Letkis in Japan here…

You can see the Letkis danced in Russia here…

People around the world are more alike than they think.

Maybe we can all bunny hop in peace around the globe one day!

Many thanks to Sadao Mazuka for pointing out the Letkis Dance craze to us!

This article was posted on Friday, April 3rd, 2015 at 4:39 pm and is filed under Australia, Bunny Hop, Countries & Cultures, Customs and Traditions, Dances, England, English, Finland, Finnish, France, Games Around the World, Germany, Italy, Japan, Japanese, Jenkka, Languages, Letkajenkka, Letkis, Russia, Russian, Sweden, Traditional Dances, USA, YouTube. You can follow any responses to this entry through the RSS 2.0 feed. You can skip to the end and leave a response. Pinging is currently not allowed.

2 Responses to “The Bunny Hop & Letkis Craze Around the World”