This song is used for circle dances on Midsummer's Eve and Christmas. It's also a kids circle game. 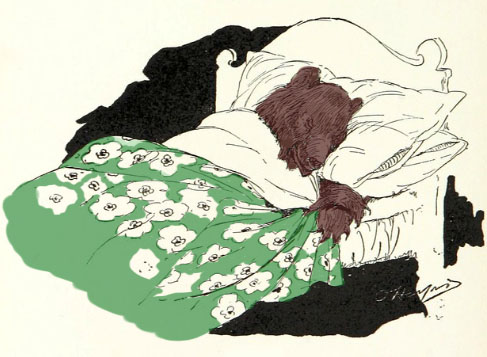 The Bear is Sleeping

The Bear is Sleeping

"I'm a children's librarian and I've been using your site for a while to add non-English songs to the mix in storytime. It's a godsend!

I've also tried to come up with English versions that have the rhyme and rhythm and general sense of the song so the kids who don't speak the language can still get an idea of what it's about as well as getting the language.

So, just for your consideration:

I hope it's okay to take some liberties with the English to fit the music."

Everyone stands in a circle. One person, the "bear" goes in the middle pretending to sleep. The kids go around the "bear" in a circle while singing this song. On the last word the "bear" jumps up and the kids scatter. The "bear" tags one of the kids. That person will be the "bear" in the next round of the game.

This song is Swedish, but is also sung in Norway.

Thanks to Barbara Walton for sending an English translation!