Here's a German version of "Ring Around the Rosie".

Ring-a-ring-o'roses,
We are three children,
Sitting under the elder bush,
All of us going hush, hush, hush!

Ring-a-ring-o'roses,
We are three children,
Sitting under the elder bush,
All of us going hush, hush, hush!

According to Wikipedia: "A German rhyme first printed in 1796 closely resembles [the English] 'Ring a ring o'roses' in its first stanza and accompanies the same actions (with sitting rather than falling as the concluding action):

Ringed, ringed row.
We are three of the children,
Sitting under an elder bush.
We all call: Hush, hush, hush! Sit down."

This rhyme is best known in Germany with the first line as 'Ringel, Ringel, Reihe'.

Versions of this song can be found in print as early as 1876 in the book, "Spiele und reime der kinder in Oesterreich" (Games and Rhymes of Children in Austria) by Theodir Vernaleken (1812-1907).

This is sung by children forming a circle and walking around the circle as they are singing. When they get to the last line in the song, they all kneel down. 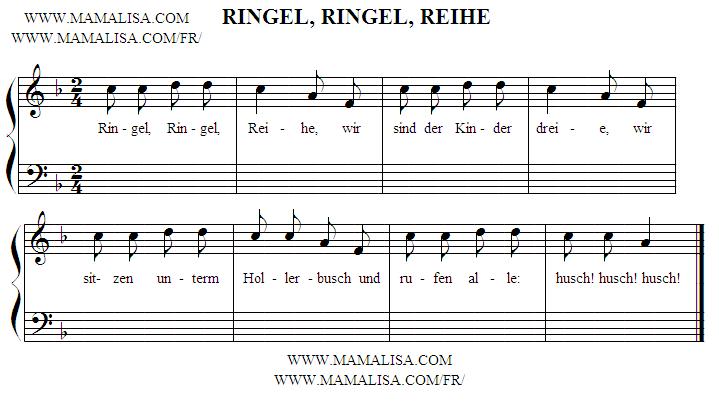 Many thanks to INTER-COM Translations for contributing this rhyme.