Ring A-Ring O' Roses is one of the best-known children's songs in the English speaking world. There are many versions. This is the most popular version in the UK. The second verse is new to the current generation of kids.

Ring A-Ring a Roses and The Great Plague

Many people think the lyrics of Ring A-Ring O'Roses allude to the Great Plague of 1665 - 1666. But the earliest version of this song in print dates back to 1881, in Kate Greenaway's "Mother Goose". According to two expert sources (1), such a late date for the first published appearance of the song makes it highly unlikely that it actually dates all the way back to the time of the Great Plague. It most likely has nothing to do with it.

(1)The Oxford Dictionary of Nursery Rhymes (1951), edited by Iona and Peter Opie and The Annotated Mother Goose (1962), edited by William and Cecil Baring-Gould. 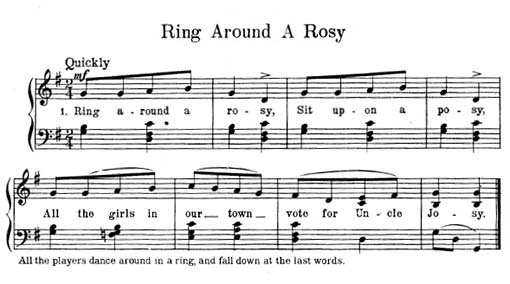 Here's the Kate Greenaway version from her book "Mother Goose or the Old Nursery Rhymes" (1881). It's the first version of this song found in print...

Here's what Steven wrote to me in 2005. It shows what most people believe about this song:

"I notice that your site has some great, obscure rhymes on it from England but is missing one of the best known and (to me) historically interesting: Ring-a-ring o' Rosies...

I find it interesting because it dates from the time of the Great Plague (1665) and is about what happens to people who catch it. They get a ring of spots or inflammation (the ring of rosies), try to stop catching or passing it on by carrying a "pocket full of posies", start to sneeze ("A'Tishoo A'Tishoo") and then "fall down" dead.

Hope that helps somehow. Thanks for your efforts.

Thanks to Steven for sending me his version and comments about this song. It's an interesting part of the history of this song, that most people believe it's connected to the plague. I used to think it was too!

Tisha sent this version from the UK:

This version below is from Percy B. Green's book, A History of Nursery Rhymes (printed in London in 1899):

Green noted, "Ring A-Ring O' Roses, is known in Italy and Germany. In the northern counties of England the children use the words, 'Hushu! Hushu!' in the third line."

"When my daughter was in nursery school in a village in Oxfordshire, England in 1977 she sang a second verse to 'Ring around the rosie, pocket full of posies, ashes, ashes, we all fall down!'. It went:

'Ashes on the water, ashes on the Sea, we all jump up with a one, two, three!'

I Downloaded a copy of an American version of Ring a Ring a Rosie and the lyrics said Rosie and ashes ashes we all fall down?

The song is of the black Death

Ring a ring a roses (wreath)

Please disregard if you know but it's bugging me they sing the wrong one and remove the warning children need to learn to stay away from sneezing people haha and history is learned this way better than reading.

Ring a Ring of Roses
A pocket full of posies
Atishoo Atishoo
We all fall down.

The plague in Britain lasted well into the 17th Century So this version seems to refer to it. Posies and nosegays were carried as a defence against catching plague. Sneezing was the first symptom, after that you quickly died (fell down)!

Here's a version from Penelope:

I was just browsing your site and noticed you don't seem to have the second verse of Ring a Roses. Or perhaps you haven't yet posted it! Anyway, this is how we used to do it (and speaking to others from around Britain) they all did the same:

(dancing in a ring as usual)
Ring a ring a rosies
A pocket full of posies
Atishoo! Atishoo!
We all fall down (crouch down)

(chanting) Down at the bottom of the deep blue sea
Catching fishies for my tea
A-one, a-two, a-three! (jump back up on three)

I found your web site looking for the words to To Bed to bed said sleepy head and then I just started to browse. I then looked up Ring-a-round the Rosies I was taught to say and sing it by my mother as the following:

Ring around the Rosie
A pocket full of Posie
Husha Husha
We all fall down.

My mother was born in 1921 and she was taught her nursery rhymes by her mother and she in turn taught me. I was born in 1964. Our family was originally from Northern Scotland. And settled in rural Manitoba, Canada. And I was taught in Winnipeg Manitoba Canada.

Here's the version from The Real Mother Goose (1916), illustrated by Blanche Fisher Wright:

Ring a ring o' roses,
A pocketful of posies.
Tisha! Tisha!
We all fall down.

Here's the version from The Little Mother Goose (1912), illustrated by Jessie Willcox Smith:

Ring-a-round-a roses,
A pocket full of posies;
Hush-hush-hush-
We'll all tumble down.

I noticed you only have 1 verse of Ring a Rosie listed. I learned the second verse as:

The cows are in the meadow
Eating buttercups
A-Tishoo A-Tishoo
We all jump up.

The actions are the same except in reverse. The ring is danced in a squat and on the last line you spring back to your feet, ready to repeat it again.

Hi Lisa
I've always loved this nursery rhyme, because it has my name in it :)

I learned this nursery rhyme as a child in Australia in the 1990s. We usually sang the traditional English version:

Ring a ring o' rosies
A pocketful of posies
A-tishoo! A-tishoo!
We all fall down

However, sometimes a second verse was added:

The cow are in the meadow
Eating buttercups
A-tishoo! A-tishoo!
We all jump up

I have no idea where this version came from but in the circle game, everyone gets up again on the last line.
Hope this is helpful!

The version I was taught

Ring o'ring O'roses ( a ring of ring of roses – represent the sores around the mouth)
A pocket full of poses ( to keep the smell away)
Ah tissue, ah tissue (or ah tew, ah tew, the sound of sneezing)
We all fall down (dead)

Ashes in the water ( ashes were all around after the Great Fire of London)
Ashes in the sea
Please pick me up
With a 1 , 2 , THREE ( 3 was shouted loudly and we stood up.)

The relevance of the ashes were from the cremation and burial of bodies, or so the story goes. Although in reality most were buried and not burnt. The ashes in the water were because they dead were affecting the drinking water causing a different sickness and the king had a huge fresh water fountain built so that people could get clean water to drink from within the city of London.

Also I heard the ashes in the water ashes in the sea represents that the great fire of London 1666 had burned down most of London which was the beginning of the end of the great plague so the pick me up with a 1 , 2 , 3 meant it was safe again.

Wikipedia said the following about Ring Around the Rosie, "It first appeared in print in 1881; but it is reported that a version was already being sung to the current tune in the 1790s."

Keith Kendall, who's from Utah in the US, shared this version with the note, "As a child, I sang it and enjoyed failing down." I'm including Keith's version here on our England page for the song because we also found it in an old book from England. (See the image of a score with Keith's version. The tune is slightly different.)

Ring around a rosy
Sit upon a posy
All the girls in our town
Vote for Uncle Josy.

Thanks to Alexandra for singing this song for us! 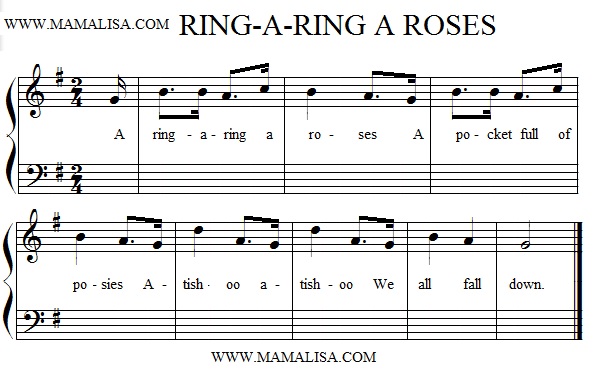 Thanks to everyone who sent another version or commentary! I always welcome more versions! -Mama Lisa

Thanks to Frances Turnbull from Musicaliti for sending the version her daughter sings! Thanks to Keith Kendall for sharing his version with a score of it.

The 1st illustration was done by Leslie Brooke, and the second by Kate Greenaway. The 3rd illustration is from The Little Mother Goose (1912), illustrated by Jessie Willcox Smith.