A place for poems, songs, rhymes, and traditions from around the world for both kids and grown-ups to enjoy!
Advertisement
The Twelfth Night in England
January 6th, 2019

I came across a recipe for a Twelfth Night CakeÂ on the BBC’s site this week. It made me thinkÂ ofÂ Kings Cake that’s eaten in France at this time of year (see pic below). 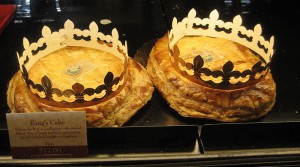 Both cakes are made for the Epiphany, a Christian holiday that marks the visit of theÂ 3 Kings to theÂ little baby Jesus.Â  Different traditions mark the date of Twelfth Night on January 5th or 6th.

According to Wikipedia, “In English and French custom, the Twelfth-cake was baked to contain a bean and a pea, so that those who received the slices containing them should be respectively designated king and queen of the night’s festivities…. [in England] it is customary for Christians in many localities to remove their Christmas decorations on Epiphany Eve (Twelfth Night)…”

Anne wrote, “I don’t actually know. Perhaps in very traditional parts of the country… I do know the Theatre Royal in London hands out 12th Night cake though.”

Frances wrote, “My family doesnât remember it up north. Saying that, I came across someone in a care home who actually remembers Christmas cakes made with figs, pulling bits out of his teeth (Figgy Pudding from ‘We Wish you a Merry Christmas’)!”

So it seems that while Kings Cake is still popular in France, Twelfth Night Cake has probably gone by the wayside in much of England.

Please let us know if you follow any Twelfth Night traditions in the comments below.

Thanks to Anne, David and Frances for sharing their knowledge of the tradition!

PSÂ  David Solomons is a musician and composer. He wrote “Of course you will already have heard my performance of the 12 days of Christmas a Conductor’s nightmare ;-) ” It’s a play on the song “The Twelve Days of Christmas.”

This article was posted on Sunday, January 6th, 2019 at 8:27 pm and is filed under Countries & Cultures, England, Epiphany, Holidays Around the World, Kings Day, Mama Lisa, Twelfth Night, United Kingdom. You can follow any responses to this entry through the RSS 2.0 feed. You can skip to the end and leave a response. Pinging is currently not allowed.