A place for poems, songs, rhymes, and traditions from around the world for both kids and grown-ups to enjoy!
Advertisement
The Coventry Carol
December 23rd, 2011

The Coventry Carol dates back to 16th century England.  It was originally part of a play that was performed in Coventry.  The rest of the play has been lost, but this song was so memorable that people kept singing it. 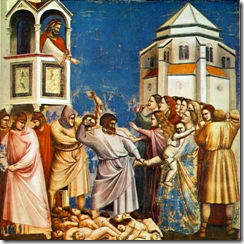 The story behind the song comes from The Gospel of Mathew in the Bible.  It’s the section called The Massacre of the Innocents, where King Herod was told by a magi about the coming of a new king in Bethlehem.  Herod ordered all the male kids under two in Bethlehem to be executed, so he could avoid losing his throne.

This song is about a mother lamenting the coming loss of her baby son.  It takes the form of a haunting lullaby that she is singing to him.

It can also be interpreted that the mother is Mary singing about the baby Jesus.

There are two different tunes used to sing this song.  You can hear each in the mp3’s below followed by the lyrics.

MP3 of The Coventry Carol

MP3 of The Coventry Carol with A Different Tune

This song was first written down by Robert Croo in 1534.  The author is unknown.  The oldest known printing of the tune dates back to 1591.

I hope everyone has a happy holiday season.

This article was posted on Friday, December 23rd, 2011 at 1:22 pm and is filed under Carols, Christmas, Christmas MP3's, Christmas Songs, Holiday Songs, Holidays Around the World, Lullabies, Lullabies from Around the World, MP3's, Recordings, Recordings of Songs, The Coventry Carol. You can follow any responses to this entry through the RSS 2.0 feed. You can skip to the end and leave a response. Pinging is currently not allowed.