A place for poems, songs, rhymes, and traditions from around the world for both kids and grown-ups to enjoy!
Advertisement
Recipe for Sweet Matzo Brei
April 13th, 2009 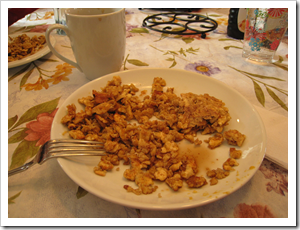 Matzo Brei means fried matzo in Yiddish.  This is a good dish to make near Passover.  That’s when most Jewish people eat it.  I’d suggest trying it even if you’re not Jewish.  Here’s one good reason: Matzoh is always on sale around Passover and there’s tons of it in the store.  How can you not buy a box?

After you buy your box of matzo, I’ll tell you two things you can do with it!  You can made Sweet Matzo Brei or Savory Matzo Brei.  Don’t go away – don’t be fearful!  If you like sweet things, you’ll like Sweet Matzo Brei.  I was suspicious about it for years.  I KID YOU NOT!  I would never in a million years have put matzo, with eggs and syrup.  But man, this is good.  If you like pancakes or French toast with syrup, you’ll like it.  If you don’t, then try the savory way (which I’ll explain how to do in my next post).  My savory way is different from everyone else’s.  Mine is like a matzo omelet.  Sounds a bit strange, yes!  But it’s actually very good.  That one I have been making for years.

You can choose how much you’d like to make depending on the number of people eating.  The key to making Sweet Matzah Brei is to use one egg per matzo. We used 10 eggs and ten matzohs for 3 adults, 2 big teenage boys with hearty appetites and 2 young girls (one six and one eight year old).  Using that as a general rule, it would be about  1 to 1 1/2 matzo per person for a serving size, depending upon how hungry the people are and how much they like to eat.

1) Soak matzo in water for a minute or two to soften (no longer than that).  Take the matzo out of the water. 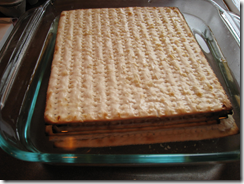 2) Break matzo into small pieces with your hands. 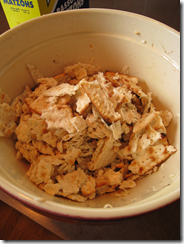 3) In a separate bowl, beat the eggs with the milk (like you would for scrambled eggs).  Add a dash or two of cinnamon and nutmeg and stir.  Then stir the egg mixture in with the matzos. 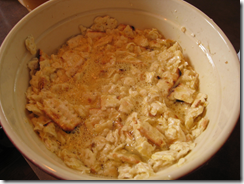 4) Melt a slab of butter in a frying pan (enough to coat the bottom of the pan). Add egg mixture.  Break up like you would like scrambled eggs while frying on medium heat. 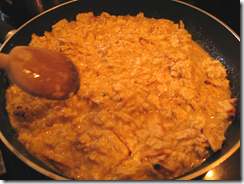 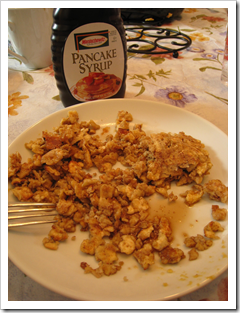 Many thanks to Dale Durdunas for teaching me this great recipe!

Next: Recipe for Savory Matzo Brei and a Matzo Omelet!

This article was posted on Monday, April 13th, 2009 at 6:27 pm and is filed under Breakfast and Brunch, Countries & Cultures, Holidays Around the World, Israel, Languages, Main Course, Passover, Recipes of the World, Savory Matzo Brei, Sweet Matzo Brei, USA, Yiddish. You can follow any responses to this entry through the RSS 2.0 feed. You can skip to the end and leave a response. Pinging is currently not allowed.