A place for poems, songs, rhymes, and traditions from around the world for both kids and grown-ups to enjoy!
Advertisement
Pochi is a Generic Dog Name in Japan Like Spot
January 11th, 2016 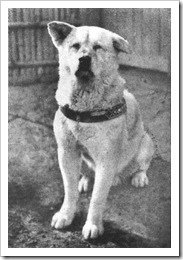 "Pochi" is a generic name for a dog in Japan just like the English stereotypical dog names "Spot" or "Rover".

Sadao wrote about it from Japan:

"Pochi" was the most popular dog name in the Meiji Period (about 100 years ago).

There are theories about where the name comes from. One is that a French missionary said the word âpetit" (little or cute). Japanese people misunderstood that it was the name of his dog and made the leap to the name "Poti/Pochi". One other theory is that it’s from the English âSpottyâ.

Here are the top ten ranking dogâs names (as recorded in the newspaper, Asahi-shinbun) from 1910:

The last name on that list, Hachi (HachikÅ), is the name of a very loyal dog from the 1920’s. Every day the dog would greet his owner at the train station after work.  When the owner died, the dog kept going to the station every day for the next nine years.

The popular dog names, Hachi, Taro and Jiro originally come from a number naming system for boys in Japan.  Until a generation ago, the most popular boys names were birth order names.  You can see the dog names came from that system as follows:

Another well-known name is âKameâ. Someone says this is from âcome hereâ that some English-speaking person was calling his dog.

Nowadays the preference of Japanese dog owners has been changing to small dogs.  So I think the popular names of dogs in Japan express smallness or cuteness:

Data from this web-site

Some other Japanese Dog Names and Their Meanings

Many thanks to Sadao Mazuka for sharing this information with us!

Photo: The dog HachikÅ in his later years.

This article was posted on Monday, January 11th, 2016 at 4:20 pm and is filed under Countries & Cultures, Dogs, Generic Dog Names, Japan, Japanese, Languages, Parenting, Pets, Words & Phrases. You can follow any responses to this entry through the RSS 2.0 feed. You can leave a response, or trackback from your own site.