A place for poems, songs, rhymes, and traditions from around the world for both kids and grown-ups to enjoy!
Advertisement
Persian Shish Kabob Recipe
October 17th, 2013 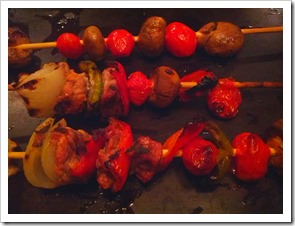 Fatima wrote to me from Iran explaining how they make shish kabob there.  Of course, I had to try it and it was delicious!  Fatima wrote:

Now you can start:

1. Boil the milk.  Once the milk reaches the boiling point, remove it from the stove before it boils over. 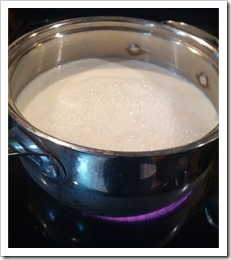 2. Then wait for the milk to get cool, but not cold. The milk should be warm. This step is very important. You can use a thermometer. They say that the milk temperature must be around 35 C. (95 F), but the traditional way is that when you put your pinky finger in the milk you should feel the milk is not too hot to burn your finger and not cold either. We use our finger to feel that the milk is warm, but not to the extent of burning. 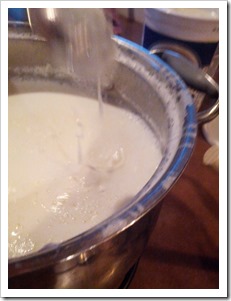 5.  Finally put the wrapped container in a warm and dry and relatively dark place for around 5-6 hours.  We usually put it in the kitchen cabinets. It depends on where you live.  You know we live in a hot region so we haven’t a problem finding the warmest place in the house.

Please note that during the fermentation process the container should not be moved or moving. You can put it in the suitable place late at night and remove it in the morning, but note that if you remove the container late (after more than 7 hours) the resulting yoghurt will be sour.

So after 5-6 hours, remove the container, open the blanket and open the lid and see if the resulting yoghurt is thick enough or not. It must be thick enough, then put it in the refrigerator for hours and then Yum Yum!  [Note from Mama Lisa: Ours was a consistency between thick cream and thin yogurt.)

Important point: it’s normal for the first time that your yoghurt would not be good or in a good shape, it takes some time to become skilled in making the yoghurt, especially to be sure about the exact milk temperature. I think the best temperature is 37 C. and for the first time I suggest you use a thermometer and your finger at the same time. So the next times you can rely on your finger more confidently.

You can use that yoghurt sauce for shish kebab as follows: First dissolve a little saffron in a little boiling water then add it to the yoghurt mixture you made.  Then add chopped or grated onion (very small pieces) and 2 tablespoons of lemon juice, plus some pepper. Mix all these ingredients. 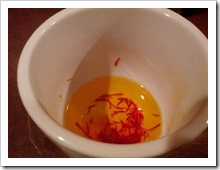 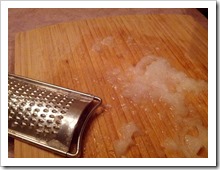 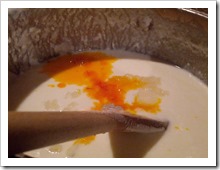 Then cut the meat into small cubes and marinate them in the sauce for around 10 hours in the refrigerator. 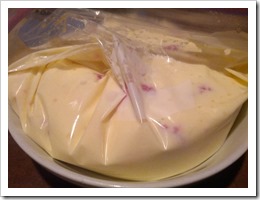 Then put the meat and fresh vegetables (red peppers, onion, etc.) on the grill.  [We soaked our skewers in water and then skewed the food on them before grilling.]

Try it, your kebab will be more delicious! 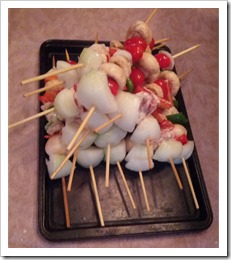 Fatima said she likes to make this with cubes of chicken.  We made it with cubes of beef and it was really good!  We also used onions, peppers and mushrooms.

Thanks for sharing Fatima!  It was really good!

This article was posted on Thursday, October 17th, 2013 at 5:14 pm and is filed under Countries & Cultures, Iran, Languages, Middle Eastern Cuisine, Persian, Persian Cuisine, Shish Kebab Recipes. You can follow any responses to this entry through the RSS 2.0 feed. You can skip to the end and leave a response. Pinging is currently not allowed.