A place for poems, songs, rhymes, and traditions from around the world for both kids and grown-ups to enjoy!
Advertisement
My Pigeon House–A Children’s Song and Game
April 3rd, 2012 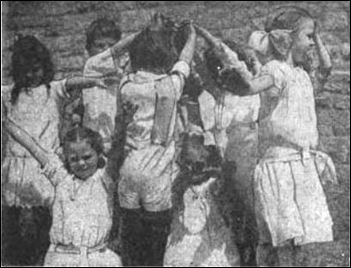 Iâve posted the song My Pigeon House twice already (click the link for one popular version) and see more versions of Pigeon House on my blog.

I know many people are interested in this song, so when I found a version from 1917 in "Primary Education" (Vol. 25), I became very curious.  But before getting to the song and game, you have to read what was written before it in the article.  Itâs talking about the âold daysâ when pigeons were used to carry messages and how in the modern time of the article (i.e. 1917) they use telephones and telegraphsâ¦

Although the aeroplane, telephone, and telegraph are now used for sending messages, tell the children about the sending of messages in former times by the carrier pigeons.

These pigeons are trained to carry messages. They fly up into the air, keep a straight course, then fly directly down. When free they always fly home again. Their speed is a mile a minute, and they can see long distances.

Of course in 1917 they didnât have cell phones, email, video-conferencing, Facebook and texting!  So if youâd like to point out to children about how quaint an idea carrier pigeons wereâ¦ you can also mention how people used the telegraph in 1917!  (This makes me wonder if someone reads this in 95 more years in the future how will they laugh at me?!  Will Facebook be around?  Or all of that other stuff?)

Back to the songâ¦ hereâs how the game is described in the article:

My pigeon-house I’ll open wide, And set all the pigeons free.
They fly o’er the fields on every side, And light on the tallest tree.

The pigeon house doors are opened by having the children who form it raise their arms, as in the illustration. This also shows the children who represent the pigeons flying out from the doorways thus formed. The pigeons raise and lower their outstretched arms in place of wings as they play flying away, and then they light on the trees by flying up onto the little reading chairs over in a corner.

Then the children sing:

But when they return from their merry flight,
We’ll close the doors, and say good-night.

Enjoy this song and remember that one day much of this technology we find so advanced will be outdated!

This article was posted on Tuesday, April 3rd, 2012 at 3:44 pm and is filed under American Kids Songs, Childhood Memories, Children's Songs, Countries & Cultures, England, English, English Children's Songs, Languages, Music, My Pigeon House, Parenting, USA. You can follow any responses to this entry through the RSS 2.0 feed. You can skip to the end and leave a response. Pinging is currently not allowed.