A place for poems, songs, rhymes, and traditions from around the world for both kids and grown-ups to enjoy!
Advertisement
Going Door-to-Door for Money or Treats from Halloween to New Year’s Day
November 18th, 2015 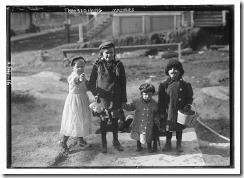 Going door-to-door for treats between Halloween and Christmas-time has been common throughout the West for the past few centuries.

These traditions have their roots in Samhain, an ancient Celtic festival that was celebrated from October 31st to November 1st, the halfway point between the autumnal equinox and the winter solstice. It was a festival that marked the end of the harvest season. It was thought to be a time when the boundary between this world and the Otherworld is thin and can more easily be crossed.Â  That makes it a time when the “spirits” (similar to fairies) could more easily enter our world. At this time the ‘souls of the dead’ would return to their homes too.Â  Food and drink offerings were left out to appease the spirits. People would have feasts, leaving a place for the spirits of the dead. This is all very similar to the Day of the Dead in Mexico today.

These traditions can be found throughout Europe going back hundreds of years under different names… Souling, guising, Hop-tu-naa and mumming to name just a few. Sometimes, people would perform or sing, hoping to receive money. Sometimes it was done by poor people to receive food. Perhaps caroling can even be considered part of this tradition. People receiving money in exchange for singing.

Of course today, throughout the world, from New York to Tokyo people go door-to-door trick-or-treating on October 31st for Halloween.

On All Saints’ Eve, All Saints’ Day and All Souls’ Day (October 31 – November 2nd) poor people and children would go Souling .Â  They’d go door-to-door singing and offering to pray for people’s dead relatives.Â  In return they would be given Soul Cakes. This tradition started in Great Britain and Ireland but eventually spread as far south as Italy.

In Portugal, kids still go door-to-door for all Saints Day and All Souls Day.Â  (Poor beggars used to too.) They sing songs and are given treats in return. They’re given broas (small bread-like cakes), chocolate nuts and sometimes money. The holiday is called PÃ£o-por-Deus.

In Germany and parts of Flanders, Netherlands, Austria and Switzerland, people go door-to-door carrying lanterns for St. Martin’s Day on November 11th. They dress up in costumes and sing and expect treats in return.

In the New York, in the early part of the 20th century, there was Thanksgiving Masking. Poor people would go door-to-door on Thanksgiving, often wearing a mask and dressing up as beggars asking for money. People would throw coins at them.

My mother remembers dressing up and going door-to-door for treats (i.e. candy) on Thanksgiving in the 1940’s in the suburbs of New York.

In New Mexico in 1930’s during the Depression. Children would go door-to-door on Christmas morning.Â  This was called “Mis Crismes“.Â  They would sing Christmas carols.Â  In return they would be given food and a bag of goodies.

Monique in France said her father remembers going to relatives’ and friends’ houses on New Year’s Day about 80 years ago.Â  She wrote, “People don’t go souling or carolling. My dad told us that when he was a child they would go to family members and friends to wish them a Happy New Year expecting to be given something (what we call ‘les Ã©trennes’) in return.Â  He always told us how they’d go to their grandma and she’d give them some chestnuts. The chestnuts gift was because she was so poor, she didn’t have anything else to give them. Less poor people would give the children some coins.”

Del Dallimore grew up in Wales, she wrote, “As a child growing up in Wales, we were never allowed to go Carol singing. But on New Years Day, before 12 o clock we could sing Blwyddyn Newydd Dda around the houses and householders would give us money. My grandparents said that in their time women would not be allowed on the street before twelve because it was considered very unlucky.”

It’s interesting that the tradition of going door-to-door that has spread to so many countries has its origins in an ancient Celtic Festival related to the end of the harvest.Â  Perhaps after the harvest, people have typically felt more “rich” and have been more willing to give to others and have a big celebration.