A place for poems, songs, rhymes, and traditions from around the world for both kids and grown-ups to enjoy!
Advertisement
Fennel Salad Inspired by Bittman (with a side salad of – now don’t be frightened – mibuna!)
November 25th, 2008

I mentioned in my last blog post how we belong to a CSA (Community Sponsored Agriculture). We get less expensive organic vegetables that come from a farm that day. We get whatever vegetables come in each week – there’s a little choice sometimes – but to a large extent – we get whatever’s in season at the time.

Last week we got, among other things, fennel and mibuna. Fennel tastes to me like licorice. I love it plain. But since I’m trying to fit these vegetables into our family meals, I’m often looking for recipes to deal with them. I was happy today to find a recipe that featured fennel by Mark Bittman in the New York Times. His recipe included celery (which I have in the house) and thinly sliced parmesan cheese (which I don’t have in the house – I only have grated parmesan). 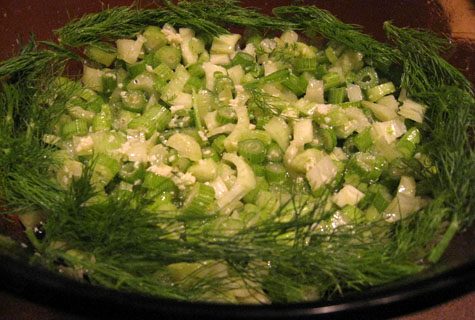 Another complication to using Bittman’s recipe exactly as is, is that the fennel from the CSA is so good, that you don’t want to throw any part of it out.

I cut up the fennel. After that, I happened to go over to my daughter to give her a kiss. She told me my breath smelled good. That’s because I was nibbling on the fennel. So I told her to try it. She liked it. So I put some to the side for her to eat plain – like she likes most food.

Then I added some grated parmesan (I recommend decent quality cheese for this purpose), olive oil, freshly squeezed lemon juice, salt, pepper and a little fleur de sel (which you can use if you have it – it’s a very tasty salt from France). I mixed it all together and voila – it’s great!

I also had a little mibuna in the fridge. Mibuna is a green leaf in the mustard family from Japan. It’s not as strong as most mustard greens I’ve tasted – though it has a little kick to it. I put some of the same mixture of olive oil, lemon juice, parmesan, salt, pepper and fleur de sel over it to make another little salad – Yum! 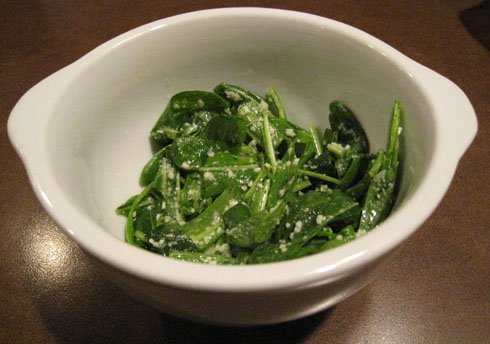 Check out Mark Bittman’s video to see how he made his salad. Yum Um!

This article was posted on Tuesday, November 25th, 2008 at 9:28 pm and is filed under Countries & Cultures, Fennel Salad, Food and Nutrition, Japan, Mama Lisa, Mark Bittman, Mibuna Salad, Organic Food, Parenting, People, Recipes of the World, Salads, USA. You can follow any responses to this entry through the RSS 2.0 feed. You can leave a response, or trackback from your own site.