A place for poems, songs, rhymes, and traditions from around the world for both kids and grown-ups to enjoy!
Advertisement
Breaking Piñatas for Las Posadas in Mexico (+ a Piñata Song)
December 18th, 2015 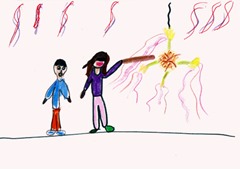 Las Posadas is part of the Christmas caroling tradition in Mexico. People go from house to house reenacting Joseph and Mary looking for housing in Bethlehem. After caroling, people have parties with piÃ±atas.

PiÃ±atas are made of papier-mÃ¢chÃ©, tissue paper and sometimes clay inside. They’re filled with candy. People take turns beating the piÃ±ata with a stick until it breaks open and the candy comes pouring out.

The piÃ±atas used for Las Posadas are usually in the shape of a star with 5, 7 or 9 points. For Christians, each point represents one of the deadly sins. Beating the piÃ±ata represents fighting sin and the candy pouring out represents the reward for fighting evil.

There’s a song that’s sung while people try to break the piÃ±ata. It goes like this…

Hit, hit, hit,
Don’t lose your aim,
Because if you lose it,
You’ll lose the way.

Here you can learn more lyrics to the Cantos para romper la piÃ±ata (Songs for Breaking the PiÃ±ata).

This article was posted on Friday, December 18th, 2015 at 2:29 pm and is filed under Children's Songs, Christmas, Countries & Cultures, Games Around the World, Holiday Songs, Holidays Around the World, Las Posadas, Las Posadas, Las Posadas Songs, Mexican Children's Songs, Mexico, PiÃ±atas. You can follow any responses to this entry through the RSS 2.0 feed. You can skip to the end and leave a response. Pinging is currently not allowed.