A place for poems, songs, rhymes, and traditions from around the world for both kids and grown-ups to enjoy!
Advertisement
Movies Worth Seeing in 3D
December 18th, 2015 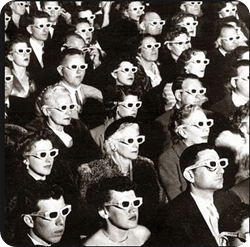 Most films are not worth seeing in 3D.

Usually, the 3D aspect of films seems like an afterthought that’s only added to make more money.  It’s rare that it has any real artistic value.

There are two movies that 3D effects made more magical… Coraline and Hugo.

We went to the movie theater to get tickets for the new Star Wars movie today and asked the ticket-seller if he recommended it in 3D.  He said no.  He agreed that most movies aren’t worth seeing in 3D. He felt that Avatar and Life of Pi had great 3D effects.

Share your opinion with us in the comments below.  Which movies do you feel are worth watching in 3D?

This article was posted on Friday, December 18th, 2015 at 8:04 pm and is filed under 3D Movies, Countries & Cultures, Movies, TV & The Internet, USA. You can follow any responses to this entry through the RSS 2.0 feed. You can skip to the end and leave a response. Pinging is currently not allowed.