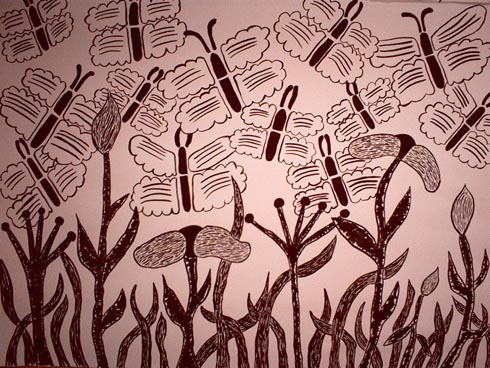 Nicole Midura had originally sent me this version:

Little butterflies
Beautiful and white
You fly and fly
And you never get tired.

Nicole wrote, "There are other verses to the butterfly song, but I can't remember them for the life of me."

Later I wrote Nicole asking about the differences in spelling between her version and a later one we received and she wrote me, "Since the songs were handed down from my mother it very well may be dialect. I speak both her dialect (which really amounts to a bunch of slang) and a bit of the 'perfect' form. The word 'farfalline' is already plural. The singular form would end in 'a'. That is why I changed the translation to Little Butterflies, instead of Little Butterfly."

By a happy coincidence I received the following version of "Farfallina" within a week or so of Nicole's version. This one was submitted by Lois Erskine. Here's it is...

Beautiful white butterfly
Without tiring, fly and fly
Turning here and turning there
Until she rests on Daddy's chest.

Lois wrote, "This is a song for young babies. The mother sings it while making little butterfly movements with her hand on the baby's tummy, legs, neck, face and arms. On the final line of the song she does the butterfly tickle on the baby's father."

Nina wrote: "I am first generation Sicilian. My Nonna used to sing this to me..."

White little butterfly
Flies and flies and never tires
Turns here and turns there,
And places herself upon a flower.

Many thanks to Nicole Midura, Lois Erskine, Nina and Lisa (Presutti) TerKeurst for contributing and translating the four different versions of this song. (The version with two verses above was submitted by Lisa Terkeurst.)

Thanks to Gracie for the wonderful illustration!