This "nursery rhyme" is actually the first verse of a longer poem that was written by William Miller (1810 - 1872) of Glasgow, Scotland. The poem was first printed in a collection published by David Robertson in 1841. Here's the whole poem which is in Scots:

Wee Willie Winkie rins through the town,
Up-stairs and doon-stairs, in his nicht-gown,
Tirlin' at the window, cryin' at the lock,
"Are the weans in their bed? - for it's now ten o'clock."

Hey, Willie Winkie! are ye comin' ben?
The cat's singin' gay thrums to the sleepin' hen,
The doug's speldered on the floor, and disna gie a cheep;
But here's a waukrife laddie that winna fa' asleep.

Wearie is the mither that has a storie wean,
A wee stumpie stoussie that canna rin his lane,
That has a battle aye wi' sleep before he'll close an ee;
But a kiss frae aff his rosy lips gies strength anew to me.

Translation of the Scots Poem

"This is an old Scottish nursery rhyme. I managed to get it and its translation from the net. Wee Willie Winkie was a kind of Sandman who went through the town at night, visiting children who would not go to sleep..."

The translation Marion sent didn't quite match the poem above that this rhyme is really based on. So I came up with the modern English translation below of the original Scottish poem (using Marion's translation to help)...

Wee Willie Winkie runs through the town,
Upstairs and downstairs in his nightgown,
Tapping at the window, crying at the lock,
"Are the children in their bed, for now it's ten o'clock?"

"Hey, Willie Winkie, are you coming in?
The cat's singing purring to the sleeping hen,
The dog's spread out on the floor, and doesn't give a cheep,
But here's an insomniac boy that will not fall asleep!"

Anything but sleep, you rogue! glowering like the moon,
Rattling on an iron jug with an iron spoon,
Rumbling, tumbling round about, crowing like a cock,
Shrieking like I don't know what, waking sleeping folk.

"Hey, Willie Winkie - the child's in a basket!
Wriggling from everybody's knee like a very eel,
Tugging at the cat's ear, and confusing all her purrs
Hey, Willie Winkie! See, there he comes!"

Weary is the mother who has a dusty child,
A small short child, who can't run on his own,
That always has a battle with sleep before he'll close an eye
But a kiss from his rosy lips gives strength anew to me. 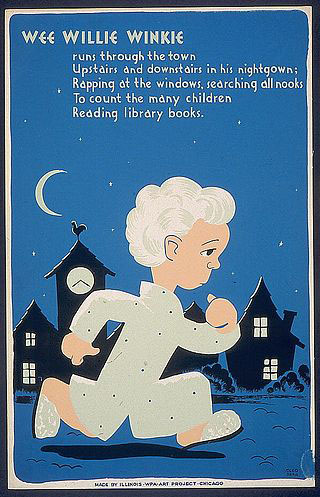 You can hear the full poem, which you can read below, in the mp3 recording...

Recorded by Kara Shallenberg for Librivox.