A place for poems, songs, rhymes, and traditions from around the world for both kids and grown-ups to enjoy!
Advertisement
How Now Brown Cow? Its Origins and Usage
January 6th, 2015 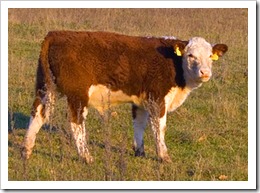 When I was very little (less than 5 years old), all the kids in my neighborhood used to chant, "How now brown cow!"

It turns out that the phrase originally came from Scotland in the 1700’s.  Some sources say that, "brown cow" was a phrase that used to mean a barrel of beer because a barrel of beer is brown and ungainly like a cow.  Other sources said "brown cow" just referred to the beer and that people could order another beer by saying, "How now brown cow."

More recently, "brown cow" can refer to a root beer float (i.e. vanilla ice cream floating in root beer soda).  The phrase, "How now brown cow" has been used as a pronunciation exercise (like "The rain in Spain falls mainly on the plain").  It has also been used as a playground chant in some parts.

I find it interesting how I still remember this chant after so many years… "How now brown cow!"

An Etymological Dictionary of the Scottish Language: Illustrating the Words in Their Different Significations, by Examples from Ancient and Modern Writers; Shewing Their Affinity to Those of Other Languages, and Especially the Northern; Explaining Many Terms, Which, Though Now Obsolete in England, Were Formerly Common to Both Countries; and Elucidating National Rites, Customs, and Institutions, in Their Analogy to Those of Other Nations: to which is Prefixed, a Dissertation on the Origin of the Scottish Language, Volume 1 (1808) by John Jamieson.

Speaking of Animals: A Dictionary of Animal Metaphors (1995) by Robert Allen Palmatier.

This article was posted on Tuesday, January 6th, 2015 at 8:14 pm and is filed under "How now brown cow", Countries & Cultures, England, English, Languages, Scotland, USA, Words & Phrases. You can follow any responses to this entry through the RSS 2.0 feed. You can skip to the end and leave a response. Pinging is currently not allowed.

3 Responses to “How Now Brown Cow? Its Origins and Usage”