A place for poems, songs, rhymes, and traditions from around the world for both kids and grown-ups to enjoy!
Advertisement
Weddings in China
July 17th, 2011 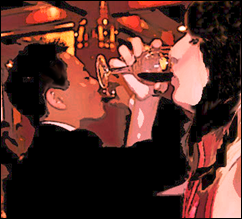 Monique, who’s from France, went to a wedding party in China when she visited friends there last year.  Here’s what she wrote about the party and about weddings in China in general…

Marriage formalities consist of filling out some forms and bringing them to some office, then you go back to get them back some days later approved and stamped: and you’re officially married!

So what we witnessed was the whole wedding minus the official part. It was the wedding party for family, friends and colleagues.

So, from what we experiencedâ¦ before the wedding, the bride and groom go to a photographer’s to have some photos taken to make the wedding album. There are special wedding photo studios. The bride and groom dress in different clothing â in the case of the wedding I went to, the bride wore some gowns, including the old style ones… the result is a wedding album, a dvd and photos of different sizes, one being "the" wedding photo (about 6ft tall and 4 ft wide) that they put at the entrance of the wedding party hall, later they usually put it in their bedroom. There’s no wedding album the way we have here in France, i.e. made of photos taken on the wedding day.

The party mostly consisted in a big lunch. The people invited to the wedding pick a special red envelope, put some money in it and write some wishes on it âso the newlyweds know who gave them money and can thank them. The envelopes are gathered by some friends or family members entrusted for the task. Every guest receives a small box with some candies in it.

At one point, I remember the bride and groom being alone on the stage bowing to the earth, the sky, their parents and each other. Online I found that, "Chinese wedding ceremony rituals consist of bride and groom paying their respects at the altar to the heaven and earth and the groom’s ancestors and witnessed by relatives and friends."  That’s what they did. But I don’t remember them doing any tea ceremony like it says online.They also called up some people to have photos taken.

Then before people started their meal, they opened some bottles of Champagne that they poured down a pyramid of glasses and that they gave to (what seemed to be) the young unmarried people. The bride also threw her wedding bouquet the same way we do it in the West âprobably an imported custom- but she was dressed with a traditional red gown while many wear a Western white wedding gown in China nowadays.

The newlyweds also drank wine with their arms interlocked (see photo above).

Then lunch was served. It was in a hotel and the tables were set the way they are in a restaurant âI mean that they weren’t arranged in the shape of a U as it often happens when you get long, rectangular tables or when, even if they’re round, people leave some space in the middle to allow people to dance. The party doesn’t include dancing, people just eat their lunch then leave.

During the lunch, the newlyweds go from table to table so that people can toast them. They’re supposed have a drink at every table. When the newlyweds were going from table to table they offered cigarettes and candy, the guests would welcome them with a drink but also with some kind of forfeits to perform. One consisted in her slipping a raw egg in his pants by the bottom of one leg and "climb it up" along his leg, "climb it down" along the other leg and take it out from the bottom of the other leg.

At the end of the lunch, people left the same way you do when you go to a restaurant, I mean they didn’t go to bid the newlyweds goodbye, they just left.

The bridal bed had been specially arranged by "someone" (in this case it was the groom’s mom).  Some candies and coins (I don’t remember if there was anything else – no lotus seeds for sure) had been spread on their bed to represent happiness and good fortune wished to the newlyweds. They were not just scattered, they were placed (if not following some pattern) prettily on the bedspread. 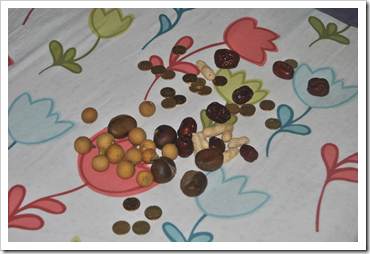 Thanks for sharing Monique.

This article was posted on Sunday, July 17th, 2011 at 2:32 pm and is filed under China, Chinese, Countries & Cultures, Customs and Traditions, Gift Giving, Holidays Around the World, Languages, Wedding Attire around the World, Wedding Gifts, Weddings, Weddings. You can follow any responses to this entry through the RSS 2.0 feed. You can skip to the end and leave a response. Pinging is currently not allowed.