A place for poems, songs, rhymes, and traditions from around the world for both kids and grown-ups to enjoy!
Advertisement
The Japanese Art of Etegami
July 19th, 2011

Etegami is a Japanese art form that everyone can partake in.  It translates to "picture letter" and basically consists of drawing a picture and writing something on it, like a proverb, a line of a poem, haiku or simply a description of the picture. Etegami are usually created on postcards and are meant to be sent out not framed!

According to Debbie an etegami artist, "They often depict some ordinary item from everyday life, especially items that bring a particular season to mind." 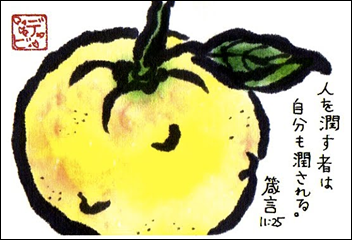 The Debbie’s etegami above is of a yuzu (a Japanese citron).  Yuzu are in season around the Winter solstice.  Debbie received a box of yuzu last December from a friend and was inspired to create this piece.  The writing says, "Whoever refreshes others will be refreshed (Proverbs 11:25)".  You can read Debbie’s blog post about it here.

According to Debbie: "The basic concept [of etegami] has been around for a long time; the Japanese tradition of handmade New Years cards testifies to it. But the present-day surge in etegami popularity in Japan started after the work of artist Koike Kunio was taken up by the media in the late 1970s.

Koike is the current president of the Japan Etegami Society, and may rightly be considered the ‘father of the modern etegami movement.’ The etegami motto, which he made famous, is ‘heta de ii, heta ga iiâ’This translates roughly to: ‘Clumsiness is not a problem.  In fact clumsy etegami are often the most charming!’ Encouraged by this motto, more and more people have taken up etegami as an enjoyable and relaxing pastime.

Many thanks to Debbie, aka Dosankodebbie, for sharing her work!  Debbie has a wonderful blog which talks about her etegami and shows her work called Dosankodebbie’s Etegami Notebook.  If etegami intrigues you, but you prefer to view, rather than to create, you may be interested in Debbie’s etegami shop on Etsy.

This article was posted on Tuesday, July 19th, 2011 at 12:29 pm and is filed under Arts and Crafts, Cards, Countries & Cultures, Etegami, Handmade Cards, Japan, Japanese, Languages. You can follow any responses to this entry through the RSS 2.0 feed. You can skip to the end and leave a response. Pinging is currently not allowed.