A place for poems, songs, rhymes, and traditions from around the world for both kids and grown-ups to enjoy!
Advertisement
Wedding Lore and Superstitions
April 24th, 2012 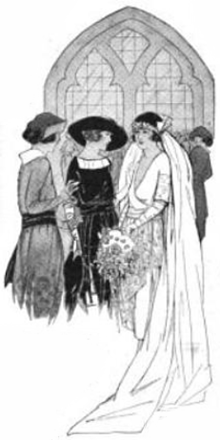 I found this article about wedding superstitions in a very unlikely place:  an American journal from 1906 called, Brotherhood of Locomotive Engineers.  It was written by Memphis Scimiterâ¦

The old rhyme that had to do with the days of the week still holds considerable power in the choice of the wedding day in some districts. In Scotland one seldom hears of a Saturday wedding, while in both France and Ireland Sunday is the favorite day. The Romans considered Wednesday the luckiest of the week, and the old rhyme referred to carries out the same idea. It runsâ¦

"Monday for health. Tuesday for wealth, Wednesday the best day of all; Thursday for crosses, Friday for losses, And Saturday no luck at all!" 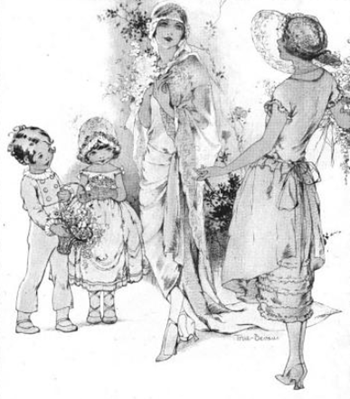 A January bride will be a good housekeeper, good-tempered and thrifty.

A February bride will prove an affectionate wife and good mother.

A March bride will turn out a frivolous chatterbox, given to mischief-making and quarreling.

An April bride will be inconstant; not very intelligent, but fairly good-looking.

A May bride is handsome, amiable and likely to make others happy.

A June bride will be sunny-tempered, impetuous and generous.

A July bride is likely to prove quick tempered, though ready to forgive and forget.

An August bride is usually practical, clever and a good housekeeper.

A September bride is said to be affable, discreet and well liked by all.

An October bride will be pretty, coquettish, loving, but intensely jealous.

A November bride is liberal and kind, but of a wild disposition.

A December bride is extravagant, fond of novelty and entertaining.

The old superstitions anent [about] the wedding gown have been rhymed to suit almost every country and every class of wearer. The rhyme announces:

Illustrations from the Ladiesâ Home Journal (1921).

This article was posted on Tuesday, April 24th, 2012 at 4:34 pm and is filed under Countries & Cultures, Customs and Traditions, England, Folk Lore, France, Holidays Around the World, Ireland, Italy, Roman Culture, Scotland, Superstitions, USA, Wedding Attire around the World, Weddings, Weddings. You can follow any responses to this entry through the RSS 2.0 feed. You can skip to the end and leave a response. Pinging is currently not allowed.