A place for poems, songs, rhymes, and traditions from around the world for both kids and grown-ups to enjoy!
Advertisement
Traditional Indonesian Hot Beverages
March 18th, 2018

In December,Â Lin wrote from Indonesia about the Hot beverages they drink there in the winter-time…

December, January and February are perfect times for hot and tasty drinks. My favorites are Sekoteng, Ginger Wedang, and Bandrek with Milk. Here some Indonesian traditional beverages with linksÂ to recipes, hope you find them interesting.

(AsideÂ from hot coffee and tea) 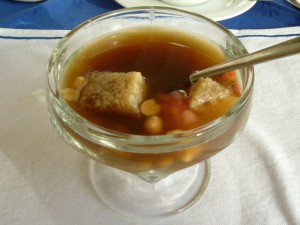 Sekoteng is a drink nativeÂ to Central Java withÂ a ginger flavor that’s served hot. SekotengÂ is made of ingredients like peanuts, red tapioca pearls or pacar cina (sago pearls from tapioca) andÂ chunks of bread added with palm sugar and ginger. It is usually sold by street vendors or humble traveling trolleysÂ atÂ night-time.

A fresh, sweet and sour drinkÂ that’s made with turmeric, tamarind, ginger, water and sugar. It’s believedÂ to be a good drink for young women, as it can soften the skin, eliminate body odor, accelerate menstruation, and dump excess fat. Kunyit Asam also can act as an antioxidant and anti-inflammatiory. It is best served hot, or cold with ice cubes. So refreshing!

This Jamu is a very common type of traditional Jamu (the word jamu refers to an Indonesian herbal drink that’s drunk for it’s beneficial properties). It’s made with ginger, tamarind, white rice turmeric and herbs. Usually parents encourage their children to drink this Jamu to increase their appetite and energy. For adults, Jamu Beras Kencur is good for maintaining stamina and immunity. 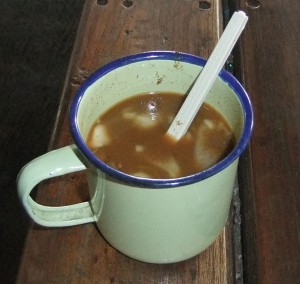 Bandrek is one of Indonesia’s traditional hot beverages. Originally it is from Sunda, West of Java, however now it has spread around Indonesia. Bandrek is also now available in sachets sold in supermarkets. ItÂ has a sweet and spicy taste as a result of ginger. Other ingredients include palm sugar, cinnamon, star anise, cloves, coriander seeds, cardamom pods, lemongrass, and sometimes black paper. Bandrek also can be addedÂ to milk and then it’s called âbandrek susuâ or Bandrek Milk. It is usually consumed at night or when it’s rainy/cool weather. 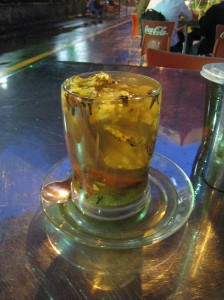 Wedang in the Javanese language means drink that’s usually consumed in cold weather. Wedang JaheÂ almost has the same tasteÂ as the original bandrek, however it’s more simple and spicy as it’s only made of ginger water, palm sugar, pandanous leaf, a little bit salt and lemongrass.

Of the various types of wedang, wedang uwuh is a unique oneÂ considering its name. In Javanese, âuwuhâ means junk/organic trash. But donât let this traditional beverageâs name scare you away. Wedang uwuh got its name because the organic foliage that is added to the beverage sometimes resembles scattered stuff. It combines ginger water, sappanwood, sugar cube and brown sugar. But what gives it its distinctive name is the combination of the leaves, flowers, stems and roots of cloves, cinnamon, nutmeg and lemongrass. Wedang uwuh is filled with antioxidants, and can also help lower cholesterol, refreshing the body, relieve fatigue, cure and prevent colds, and certainly it can warm the body. 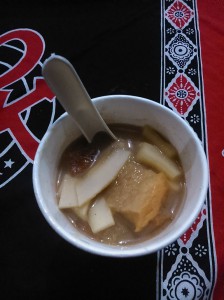 Bajigur is an Indonesia traditional hot beverageÂ that’s originally from Sunda, West of Java. These drinks are usually served warm and a have similar taste and flavorÂ to Bandrek or Wedang Jahe. Bajigur is made with palm sugar, coconut milk with a little bit of ginger, salt, cinnamon and vanilla.

This drink is perfect to drink at night to keep warm. The name pletok also has unique origins. In the Dutch colonial period, the Japanese invaders were often seen drinking pop beer at checkpoints.

Betawi people make their own pop beerÂ which they put into a bamboo tube and mix with ice cubes. When the drink in a bamboo tube is shaken, you hear a pletok-pletok (pop! pop!) sound. That’s why it has the name pletok.

Bir Pletok is believed to have various benefits, including relieving heat, prevent colds, and warming up the stomach.

Many thanks to Lin for sharing info with us about hot Indonesian beverages!

This article was posted on Sunday, March 18th, 2018 at 5:26 pm and is filed under Countries & Cultures, Drinks, Indonesia, Indonesian, Indonesian Cuisine, Languages, Mama Lisa, Recipes of the World, Seasonal, Weather, Winter. You can follow any responses to this entry through the RSS 2.0 feed. You can skip to the end and leave a response. Pinging is currently not allowed.