A place for poems, songs, rhymes, and traditions from around the world for both kids and grown-ups to enjoy!
Advertisement
The Telephone Game
October 2nd, 2017 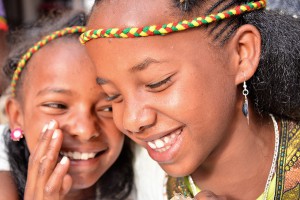 The Telephone Game is played all around the world.

To play, a group of children sit in a circle. The first child whispers something into the ear of the person next to him. That person in turn whispers the same sentence into the ear of the person next toÂ her and so on around the circle. Once the phrase gets to the last person, that person says it out loud.Â Then the original person who said it tells what they originally said. The fun in this game lies in seeing how the sentence changes after being whispered from person to person.

It also shows how unreliable word of mouth can be.

According to Wikipedia, along with the name “Chinese Whispers”, “…it is also known under various other names depending on locality, such asÂ Russian scandal,Â whisper down the lane,Â broken telephone,Â operator,Â grapevine,Â gossip,Â don’t drink the milk,Â secret message,Â the messenger game, andÂ pass the messageÂ among others.Â In France, it is calledÂ tÃ©lÃ©phone arabeÂ (Arabic telephone) or â more politically correct âtÃ©lÃ©phone sans filÂ (wireless telephone). In Malaysia, this game is commonly referred to asÂ telefon rosak, which translates to broken telephone.”

What do you call the Telephone Game in your country?

This article was posted on Monday, October 2nd, 2017 at 6:41 pm and is filed under Canada, Countries & Cultures, France, Games Around the World, Malaysia, Mama Lisa, Telephone Game, USA. You can follow any responses to this entry through the RSS 2.0 feed. You can skip to the end and leave a response. Pinging is currently not allowed.

3 Responses to “The Telephone Game”