A place for poems, songs, rhymes, and traditions from around the world for both kids and grown-ups to enjoy!
Advertisement
A Breton Folktale from France about Dwarves
August 7th, 2017 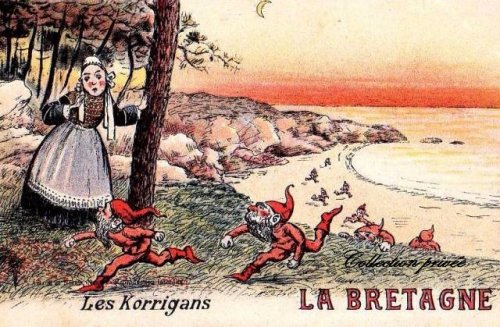 This article was written by Monique Palomares who works with us on the French version of Mama Lisa’s World.

We recently posted a Breton song about dwarves from the region in France known as Brittany. The song is called Ar C’horred (The Dwarfs).

There’s a verse in the song that’s supposed to be a song that the dwarves sing. In it, they repeat the five days of the week. There’s a tale in France that “explains” where this dwarf song comes from. You can read it below.

It’s interesting to note that in the Breton language, dwarfs are called korrigans. The word is based on “korrig” (little dwarf). They can be nice, they can also be playful, but sometimes they’re mischievous or evil.

Pierrig and Yannig are the names of the two tailors as they’re written in Breton. The “-ig” ending is the diminutive, so the names can translate to “Little Pierre” and “Little John”. In French they’re written as Pierrick and Yannick.

There are many versions of this folk tale. Â Here is the tale as I remember it…

The Two Hunchbacks and The Korrigans

There were two tailors in a town, one named Pierrig, the other named Yannig. Both were affected by the same malady, they were both hunchbacks. Pierrig was happy and cheerful, Yannig was grumpy and miserly. Both enjoyed their trade and were so skilled that all the towns around ordered clothes from them.

One day, on the way back from delivering a new suit to another village, Pierrig decided to take a shortcut through the moor. He was so tired that he lied down under a tree and fell asleep. When he woke up, night had come, the moon was high in the sky and he heard people singing. He peeped from behind the tree and saw korrigans dancing in a joyful circle on the moor.

Pierrig knew that the little people could be friendly or mischievous, one never knew. So he stepped back to resume his trip home when he put his foot on a dead branch. Â Crack! Â The korrigans stopped, went straight over to Pierrig and said, “Come dance with us!” They took him by the hand to join their dance.

They kept dancing to the same short song, “Dilun, dimeuzh, dimerc’her” which are the Breton words for Monday, Tuesday and Wednesday. Â They sang and sang and danced and danced. Pierrig was exhausted! So he stopped and said, “Your song is very short!”

“Oh, our song is much lovelier now,” they said and they went on dancing and singing their new song.

Before dawn, the oldest korrigan stopped the dance and asked, “What will we give to Pierrig for making our song nicer and longer?”

“We can give him a bagful of gold, or we can remove his hump.”

“Well, if you can remove my hump, I’ll be quite happy!” Pierrig said.

The dwarves seized Pierrig, threw him up in the air three times, passed him from one to another and then let him fall on the ground. Â Pierrig was a little stunned but when he got up, his hump had disappeared. The korrigans had disappeared too.Â  He went back home, feeling light and happy.

The next day, Pierrig came across Yannig who asked, “What happened to you? I hardly recognized you. You’re taller and quite handsome now!”

Yannig thought, “How stupid he is! I wouldn’t leave a bagful of gold! I’ll go toÂ the moor too!” So he headed to the moor that very night.

Yannig popped out from behind a tree, “Hey, here I am!”

The korrigans froze and called out, “Come dance with us!”.

But the oldest korrigan, who was also the wisest said, “It doesn’t matter; we asked Pierrig to choose between gold and beauty for making our song longer, we’ll ask Yannig the same!”

“So I’ll choose what Pierrig left!”

The dwarves seized Yannig, threw him upÂ in the air three times, passed him from one to another and let him fall on the ground. He was a little stunned, but when he got up he had two humps, his own and the one Pierrig had left!

Many thanks to Monique for sharing this story with us!

This article was posted on Monday, August 7th, 2017 at 7:12 pm and is filed under Books & Stories, Brittany, Countries & Cultures, Folktales, France, Mama Lisa. You can follow any responses to this entry through the RSS 2.0 feed. You can skip to the end and leave a response. Pinging is currently not allowed.

One Response to “A Breton Folktale from France about Dwarves”