A place for poems, songs, rhymes, and traditions from around the world for both kids and grown-ups to enjoy!
Advertisement
An Italian Game called Pindol Pandol
October 3rd, 2017

Written by Emanuela Marsura, a schoolteacher from Italy. Emanuela is interested in reviving the old-time games of childhood. A time when all children would play outside together, regardless of age. A time when most games were played with inexpensive objects that everyone can easily find. 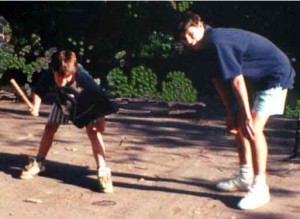 “Once upon a timeâ¦” so begins every tale, returning to a time outside of time. So also began the narrative of games of yore in Italyâ¦

Once upon a time there was a place where little boys and girls could fill their days with games. Especially days of summertime with a sunshine that enhanced the value of every hour. It was a time when all sorts of places were inhabited by children: streets, squares, courtyards, attics, loftsâ¦ where they learned about relationships and shared knowledge through GAMES.

Pindol Pandol is one of those games. It’s likely a variation of baseball and it’s been played here in Italy since the end of WW2.

To play, all you need is a small 8 inch stick called a “pindol” that two teams take turns “throwing” in the air.

You also need a 20 inch long wooden bat with a point on one side. This is called the “pandol”. It can be carved out of a firm branch with the help of an adult using a pocketknife to remove the bark and to make a slight point. It’s more meaningful when it’s homemade.

A stone or a pebble is placed in the middle of a circle made by tracing with your shoe or with a little stick. You balance the small “pindol” stick on the stone with one end raised up. Now you’re ready to play!

Holding the longer “pandol” in two hands, with the pointy end hit the raised end of the “pindol” so it pops up. When it flies in the air hit it with the “pandol” from left to right trying to get it to fly as far as possible. Mark where it lands. Then the other team takes a turn. The team that hits it the farthest wins.

This game is played in many countries. The version that’s played in India and Pakistan is called “Gilli-danda”.Â “Lippa”Â is the name of this game in other regions of Italy.

Many thanks toÂ Emanuela Marsura for explaining how to playÂ Pindol Pandol!Â  A longer version of this article was first published in Italian in Emanuela Marsura’s section of QualBuonVentoÂ magazine.

This article was posted on Tuesday, October 3rd, 2017 at 8:09 pm and is filed under Countries & Cultures, Games Around the World, India, Italian Games, Italy, Pakistan, Pindol Pandol. You can follow any responses to this entry through the RSS 2.0 feed. You can skip to the end and leave a response. Pinging is currently not allowed.