A place for poems, songs, rhymes, and traditions from around the world for both kids and grown-ups to enjoy!
Advertisement
The Mouse and the Christmas Cake
December 12th, 2010

The Mouse and the Christmas Cake is a poem about a mouse setting up house in a Christmas cake that looks like a castle.  Sweet! 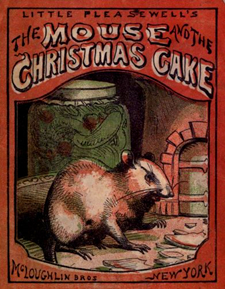 Hear a Recording of The Mouse and the Christmas Cake

Hear a 2nd Recording of The Mouse and the Christmas Cake

A LITTLE MOUSE THAT BUILT
ITSELF A HOUSE IN A
CHRISTMAS CAKE.

A PRETTY story I will tell,
Of Nib, a little Mouse,
Who took delight, when none where near,
To skip about the house.

Her little nose could sniff and smell
Where all good things were kept,
And in the pantry well she knew
That mistress Pussy slept.

But, notwithstanding, in she crept,
And on the shelf she found
A Christmas cake, the top of which
Was by a castle crowned.

The subject of the present cake
Was Windsor’s mighty walls;
With turrets, windows, standard too,
And entrance to the halls. 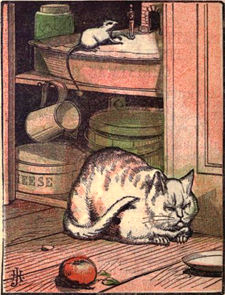 Why, here within such walls as these,
Thought Mousey, I could dwell;
And should the Cat lay siege to them,
Defend myself right well.

So, with her little teeth, which served
For pickaxe and for spade,
She gnawed right through the gothic door,
And thus an entrance made.

Then climbed the turret, which she chose
Her residence to make;
And thought to leave it now and then,
And feast upon the cake.

All this occurred on Christmas eve,
And next came Christmas day;
And then some little folks arrived,
To eat, and drink, and play. 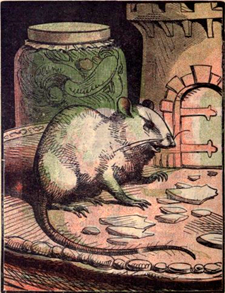 Right merry are the little folks,
And what a noise they make,
When Windsor castle they behold,
Displayed upon the cake.

The turrets and the walls they view,
The cannon, too, admire;
The soldiers ready to present,
And then – pop! – pop! – to fire.

On this, when they had long enough
All exercised their wit,
They scrutinised the cake, and wished
To taste a bit of it.

Each guest prepared,-the knife was raised
Some slices to begin,
When, lo! with wonder, all exclaimed,
"I hear a noise within!" 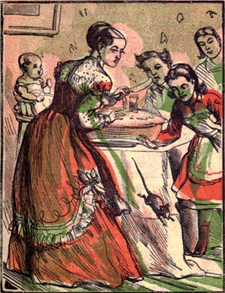 Poor Mousey, when she saw the knife,
At once expressed her fear,
By squeaking out with all her might,
Which every one could hear.

Then John, as he the turret viewed,
With consternation cried,
"There’s something, I am sure, alive,
And moving, too, inside."

All now were hushed, and knew not what
All this could be about;
While Mouse, in fright, forgot her tail,
Which at the top popped out.

"Why, here’s some trick," the lady cried,
"I’ll knock the turret down."
Mousey, in terror, gave a leap,
And ran along her gown.

"Oh!" screamed the lady, "what is this?"
On each side was dismay,
Which Mousey took advantage of,
By scampering away.

Their fright all o’er, loud laughs ensued,
From all within the house,
To think that so much fear should be
Caused by a little Mouse.

The children hunted for this Mouse,
But she was not a dolt
To wait ’till she was caught, but made
Right through a hole – a bolt.

The party then began their dance,
And singing next ensued;
And then came supper, with its cakes,
And very best home-brewed.

This article was posted on Sunday, December 12th, 2010 at 3:41 pm and is filed under Christmas, Christmas Poems, English, Holidays Around the World, Languages, Poetry, Recordings, Recordings of Poems, The Mouse and the Christmas Cake. You can follow any responses to this entry through the RSS 2.0 feed. You can skip to the end and leave a response. Pinging is currently not allowed.