A place for poems, songs, rhymes, and traditions from around the world for both kids and grown-ups to enjoy!
Advertisement
The Japanese Kanji Character of the Year for 2012 is Gold
December 27th, 2012 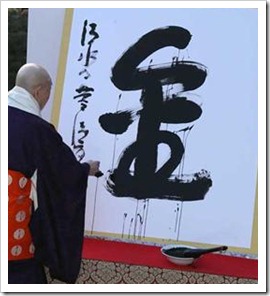 The kanji character of the year is unveiled for the 1st time at Kiyomizu Temple each year.

Many topics related to "gold" happened:

éç°æ¥é£ – A Solar Eclipse occurred in Japan for the first time in years.

éã¡ãã«ã- Gold Medals: Japan won a lot of gold medals at the London Olympics this year.

Thanks for sharing Ayako!

This article was posted on Thursday, December 27th, 2012 at 6:44 pm and is filed under Countries & Cultures, Customs and Traditions, Holidays Around the World, Japan, Japanese, Languages, New Years, Words & Phrases. You can follow any responses to this entry through the RSS 2.0 feed. You can leave a response, or trackback from your own site.