A place for poems, songs, rhymes, and traditions from around the world for both kids and grown-ups to enjoy!
Advertisement
The FÃªte de la Saint-Jean (St. John’s Eve)
April 29th, 2021 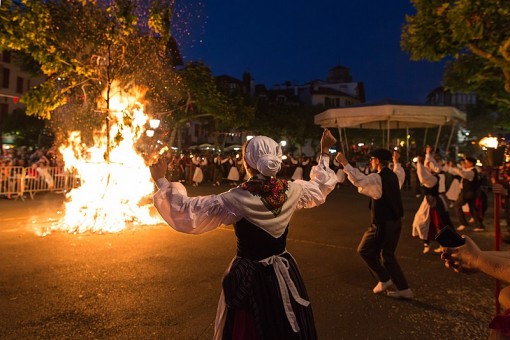 TheÂ FÃªte de la Saint-Jean (St. John’s Eve) is celebrated in France at sunset on June 23rd. St. John’s Day is actually on June 24th and it celebratesÂ the birth of St. John the Baptist (6 months before Jesus’s birth).

The festivalÂ has its roots in the ancientÂ celebration of the summer solstice. The pagans would light bonfires on the eve of the solstice. Originally, they were lit to “help” the sun whose course would shorten until the winter solstice. During the Middle Ages, people thought the bonfires wouldÂ keep sorcerers from passing by on that night.

The holiday is still held in many villages in France. It’s in part a celebration of the young ladies and men. On the 23rd, they go around collecting branches forÂ a bonfireÂ to be lit at night.Â  Sometimes when the fire starts to die down and is very low, young people jump overÂ it to show their virility. (Don’t try this at home!) There’sÂ often a nice meal involved in the festivities. Sometimes fireworks are lit and there’s singing and dancing.

On St. John’s Day, French people pick St. John’s Wort. It’s put in a bottle with oil (usually olive) to make “red oil” which is used to relieve rheumatism.Â (It is photosensitizing and can have other adverse side effects especially with different medicines. So don’t use it without reading up on it and asking the advice of your physician.)

The holiday was brought to the province of Quebec in Canada by French colonists and was celebratedÂ back in theÂ early 1600’s.Â There itÂ has three names, la FÃªte de la Saint-Jean-Baptiste (St. John the Baptist’s Day), la Saint-Jean (the St. John), and FÃªte nationale du QuÃ©bec (National Holiday of Quebec). As the latter name suggests, it is now aÂ national holiday in the Province.

The celebration starts in Quebec the night of June 23rd with Bonfires. There’s dancing and singing of folk songs. On the 24th, there are parades in the morningÂ and then a mass for St. John the Baptist’s Day. Later on there are concerts and fireworks.

Thanks to Monique Palomares for help with the details of the holiday. Monique works with me on the French and Spanish versions of Mama Lisa’s World.

This article was posted on Thursday, April 29th, 2021 at 6:36 pm and is filed under Canada, Countries & Cultures, FÃªte de la Saint-Jean (St. John's Eve), France, Holidays Around the World, Mama Lisa, Seasonal, Summer, Summer Solstice. You can follow any responses to this entry through the RSS 2.0 feed. You can skip to the end and leave a response. Pinging is currently not allowed.