A place for poems, songs, rhymes, and traditions from around the world for both kids and grown-ups to enjoy!
Advertisement
Teller of Untruths, Your Pants Have Combusted
October 1st, 2010 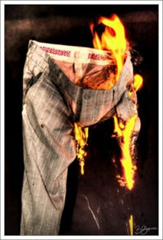 When grade school kids think someone lied to them they say, "Liar, liar pants on fire!"

My son’s high school friend told me today that if you put "Liar, Liar, Pants on Fire" into an online translator, then translate it into French, and then translate back again into English, the resulting translation is, "Teller of untruths your pants have combusted".

This phrase is all over the internet.  I had to know if it really works this way or if it’s an urban legend.  When I checked to see what happens, here’s what I got:

The French translated back to English: Trousers of liar of liar on fire

The French translated back to English: Liar liar pants on fire (someone must have contributed this translation.)

The French translated back to English: Liar’s pants of liar on fire

This is the type of result I get when I went through the translation in online translators. Sometimes it didn’t make sense, sometimes the original version came back.  I never got, "Teller of untruths, your pants have combusted".  It may be that translators have improved, that the people behind the translators fixed it or that the whole thing was made up, posted on a blog and then spread around, finally becoming an urban legend.

Perhaps someone out there on the internet is a teller of untruths whose pants have combusted!

This article was posted on Friday, October 1st, 2010 at 4:21 pm and is filed under English, Languages, Liar, Liar Pants on Fire, Words & Phrases. You can follow any responses to this entry through the RSS 2.0 feed. You can skip to the end and leave a response. Pinging is currently not allowed.

4 Responses to “Teller of Untruths, Your Pants Have Combusted”