A place for poems, songs, rhymes, and traditions from around the world for both kids and grown-ups to enjoy!
Advertisement
American Wedding Traditions
October 1st, 2010

We have some traditions that many brides follow here in the US. 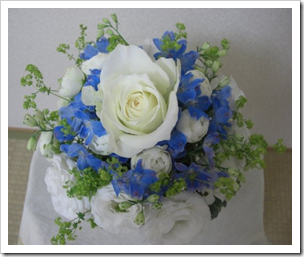 The most popular saying is…

Meaning that at the wedding the bride should be wearing something old, something new, something borrowed and something blue for good luck in her marriage.

It’s supposed to be bad luck for the groom to see the bride before the wedding ceremony.

After the ceremony, when the bride and groom are on their way out of the church or place where the vows are exchanged, the guests would traditionally throw rice at the bride and groom.  If it’s outside, nowadays the guests might throw something else (like bird seeds) because many believe the myth that raw rice will hurt the birds.

We also have the bouquet toss. Sometime after the ceremony, all of the unmarried women gather together.  The bride then tosses her bouquet over and behind her back to them.  Whoever catches the bouquet is supposed to be the next to marry.

The bride often wears a garter on her leg (many times that’s what will have the blue in it for good luck as in the saying above). The groom will take the garter off the bride’s leg and throw it to all of the bachelors at the ceremony.  Whoever catches it is the next to marry.

Also, during the reception, if someone clinks on their glass with a spoon, the bride and groom have to kiss.

Feel free to add any wedding traditions you know of from anywhere around the world in the comments below.

This article was posted on Friday, October 1st, 2010 at 3:31 pm and is filed under Countries & Cultures, Customs and Traditions, USA, Wedding Attire around the World, Weddings. You can follow any responses to this entry through the RSS 2.0 feed. You can skip to the end and leave a response. Pinging is currently not allowed.