A place for poems, songs, rhymes, and traditions from around the world for both kids and grown-ups to enjoy!
Advertisement
Snow in the Suburbs – A Poem by Thomas Hardy
February 9th, 2013 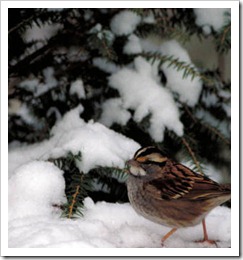 Snow is in the air!  Here’s a poem called, "Snow in the Suburbs" by Thomas Hardy with an mp3 recording.

MP3 of Snow in the Suburbs

Snow in the Suburbs

Every branch big with it,
Bent every twig with it;
Every fork like a white web-foot;
Every street and pavement mute:
Some flakes have lost their way, and grope back upward when
Meeting those meandering down they turn and descend again.
The palings are glued together like a wall,
And there is no waft of wind with the fleecy fall.

A sparrow enters the tree,
Whereon immediately
A snow-lump thrice his own slight size
Descends on him and showers his head and eye
And overturns him,
And near inurns him,
And lights on a nether twig, when its brush
Starts off a volley of other lodging lumps with a rush.

The steps are a blanched slope,
Up which, with feeble hope,
A black cat comes, wide-eyed and thin;
And we take him in.

This article was posted on Saturday, February 9th, 2013 at 6:14 pm and is filed under English, Languages, MP3's of Poems, Poems, Poems about Snow, Poems about Winter, Poetry, Poetry about the Seasons, Poetry about the Weather, Poets, Recordings, Recordings of Poems, Thomas Hardy. You can follow any responses to this entry through the RSS 2.0 feed. You can leave a response, or trackback from your own site.