A place for poems, songs, rhymes, and traditions from around the world for both kids and grown-ups to enjoy!
Advertisement
Pasting Up "Spring Couplets" for the Chinese New Year
February 10th, 2013 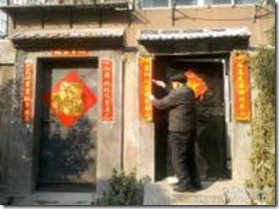 Kita wrote from China a couple of days ago about how she hung up banners with Spring Couplets on them around her door for the Chinese New Year :

"Tonight is Chuxi. (Chinese New Year’s Eve.) This afternoon, my grandpa and I pasted up spring couplets.

My grandpa makes the paste with flour. We mix flour and water and then boil them together. It becomes very sticky. Then we paste up the banners. Using this self-made paste to paste up spring couplets is better than glue.

The banners were written by people who are good at calligraphy. People used to write them personally, and the banners used to be black characters written on red paper. Nowadays, people just print them, and sometimes they use gold characters.

The Spring Couplet is pasted up on both sides of the door.  A horizontal scroll bearing an inscription, usually an auspicious phrase is put above the gate (or door).

This year, my family’s spring couplet is:

[The couplets seem to be a play on words done with Chinese characters in a way that cannot be done with the Roman alphabet in English.  Here’s the example Kita gave…]

There are also some rules about sounds in couplets. Chinese has different tones, usually we say there are four tones. Characters have two classifications: å¹³ and ä»  (level and oblique tones).   This classification is also used in ancient poetry.

The first tone belongs to å¹³ (level), and the other tones belong to ä»  (oblique).  In couplets, you have to avoid only using å¹³ or ä»  tones. They should be used alternately. Also, you can’t have only one å¹³ (level) word in a sentence."

You can read more about Spring Couplets here and about The Four Tones here.

Many thanks to Kita for sharing these traditions with us!

This article was posted on Sunday, February 10th, 2013 at 3:41 pm and is filed under China, Chinese, Chinese New Year, Countries & Cultures, Holidays Around the World, Languages, Spring Couplets. You can follow any responses to this entry through the RSS 2.0 feed. You can skip to the end and leave a response. Pinging is currently not allowed.