A place for poems, songs, rhymes, and traditions from around the world for both kids and grown-ups to enjoy!
Advertisement
Recipe from France for Gluten-free, Lactose-free Quince & Apple Crumble
December 5th, 2011 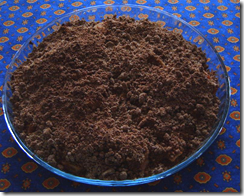 Monique Palomares sent me this recipe from France for gluten-free and lactose-free Quince and Apple Crumble.  The measurements aren’t precise so you’ll need to play around with the quantities.  Here’s what Monique wrote:

"This is a gluten and lactose-free quince and apple pie.  But you could make it with either apples or quinces.

Here’s how I made it…

I peeled some quinces, cut them into pieces and cooked them on the lowest possible heat in a frying pan with the lid on. Ditto for the apples (it takes much less time).

Meanwhile I made the "crumbs" with chestnut flour and muscovado sugar (or the like) + cinnamon to taste – using 1 part flour to 1/2 part sugar.  I always measure by eye (in French you’d say "Ã  vue de nez" which is literally "by nose sight" which means approximately).  Mix well.

Now here comes the difficult part: I added "soja cuisine" which is our soy cream, not milk -I think you can do that with silken tofu too. (When I say "difficult part" it’s because my first try was a failure.   I had added too much cream and it made a dough instead of crumbs and I had to make tiny lumps of it that turned out as hard as concrete once cooked -though tasty once softened in yoghurt!)  So… add one soy cream spoonful, blend with your fingers so you keep having a sandy mixture, then add another soy cream spoonful, blend with your fingers again, etc. Stop before you feel another spoonful would make some of your crumbs lump together in a very lightly sticky dough.

Put the fruit in a tart pan, sprinkle the crumbs on top and bake till the crumbs are cooked (10 minutes in a hot oven at 400F)."

Thanks for sharing your recipe Monique!

This article was posted on Monday, December 5th, 2011 at 11:35 am and is filed under Apple and Quince Crumble, Countries & Cultures, Desserts, France, Gluten-Free Pie Crust, Gluten-Free Recipes, Lactose-free Recipes, Recipes of the World, Special Diet Recipes. You can follow any responses to this entry through the RSS 2.0 feed. You can skip to the end and leave a response. Pinging is currently not allowed.