A place for poems, songs, rhymes, and traditions from around the world for both kids and grown-ups to enjoy!
Advertisement
Finger Plays, Rhymes and Songs about Santa’s Reindeer
December 5th, 2011 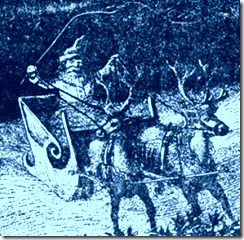 And oooh went the wind And out (clap) went the light! And Santa and his reindeer Flew out of sight!

1, 2, 3, 4, 5 little reindeer, (Put up one finger at a time on one hand while counting.) Santa said,  "Please wait! Wait for three more little reindeer, And then that will make eight." (Put up three fingers on the other hand to make 8 fingers up.)

This article was posted on Monday, December 5th, 2011 at 12:46 pm and is filed under Christmas, Christmas Rhymes, Christmas Songs, Countries & Cultures, England, English, Finger Plays, Holiday Songs, Holidays Around the World, Languages, Nursery Rhymes, Nursery Rhymes about Holidays, Rhymes by Theme, USA, YouTube. You can follow any responses to this entry through the RSS 2.0 feed. You can skip to the end and leave a response. Pinging is currently not allowed.